Chinese scientists have established the world’s first integrated quantum communication network, combining over 700 optical fibers on the ground with two ground-to-satellite links to achieve quantum key distribution over a total distance of 4,600 kilometers for users across the country. The team, led by PAN Jianwei, CHEN Yuao, PENG Chengzhi from the University of Science and Technology of China (USTC) in Hefei, reported in Nature their latest advances towards the global, practical application of such a network for future communications. Illustration of the integrated space-to-ground quantum network.

Unlike conventional encryption, quantum communication is considered unhackable and therefore the future of secure information transfer for banks, power grids and other sectors. The core of quantum communication is quantum key distribution (QKD), which uses the quantum states of particles–e.g. photons–to form a string of zeros and ones, while any eavesdropping between the sender and the receiver will change this string or key and be noticed immediately. So far, the most common QKD technology uses optical fibers for transmissions over several hundred kilometers, with high stability but considerable channel loss. Another major QKD technology uses the free space between satellites and ground stations for thousand-kilometer-level transmissions. In 2016, China launched the world’s first quantum communication satellite (QUESS, or Mozi/Micius) and achieved QKD with two ground stations which are 2,600 km apart. In 2017, an over 2,000-km-long optical fiber network was completed for QKD between Beijing and Shanghai. 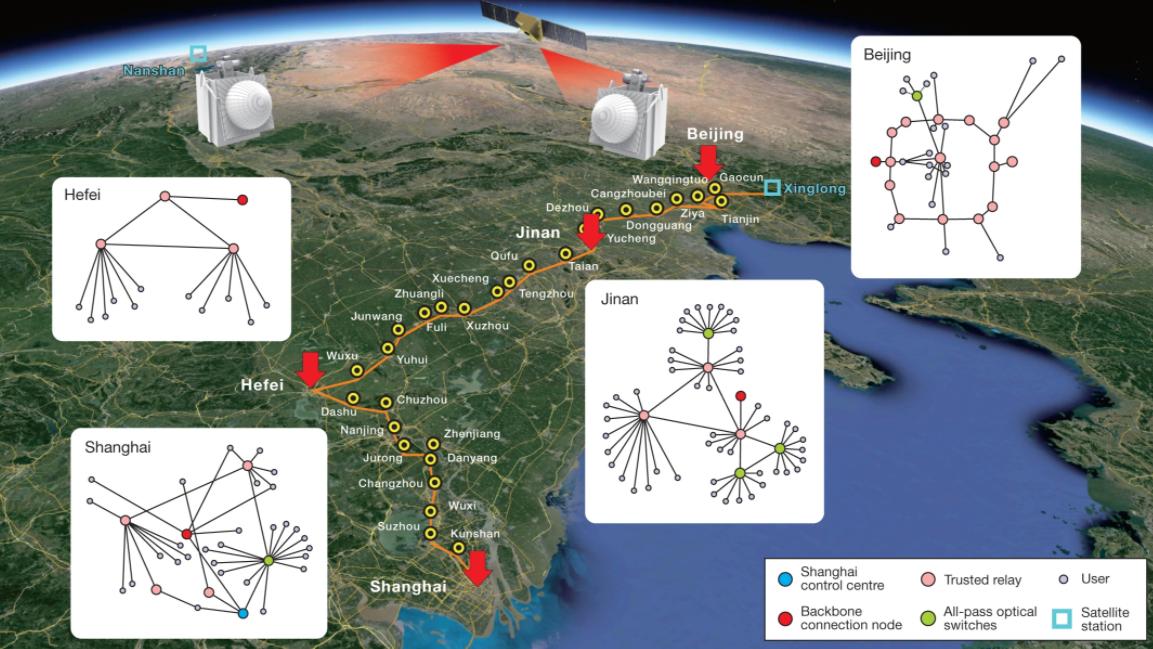 Illustration of the integrated space-to-ground quantum network(Image by: CHEN Yuao)

Using trusted relays, the ground-based fiber network and the satellite-to-ground links were integrated to serve more than 150 industrial users across China, including state and local banks, municipal power grids, and e-government websites. “Our work shows that quantum communication technology is sufficiently mature for large-scale practical applications,” said PAN Jianwei, Professor of USTC. Similarly, a global quantum communication network can be established if national quantum networks from different countries are combined, and if universities, institutions and companies come together to standardize related protocols, hardware, etc., he added.

In the last couple of years, the team extensively tested and improved the performance of different parts of the integrated network. For instance, with an increased clock rate and more efficient QKD protocol, the satellite-to-ground QKD now has an average key generation rate of 47.8 kilobits per second, which is 40 times higher than the previous rate. The researchers have also pushed the record for ground-based QKD to beyond 500 km using a new technology called twin-field QKD (TF-QKD).

Next up, the team will further expand the network in China and with their international partners from Austria, Italy, Russia and Canada. They also aim to develop small-scale, cost-efficient QKD satellites and ground-based receivers, as well as medium and high earth orbit satellites to achieve all-time, ten-thousand-km-level QKD.