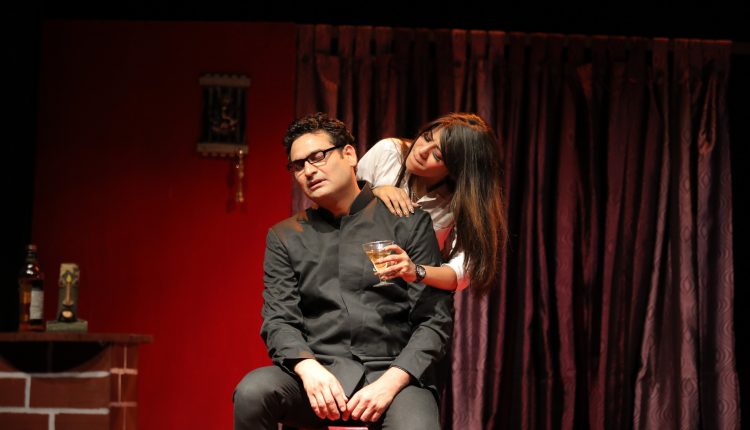 · The Austrian Embassy, Austrian Cultural Forum and The Embassy of The Czech Republic, and Sideways Consulting lend support to the theatre.

New Delhi, 6th March 2021: Shri Ram Center, Mandi House, famous for theater and arts, was once again full of theatre lovers after a year. ‘Giraftari’ became the first play to kick start theatre at Shri Ram Centre which stopped last year due to COVID Pandemic. Following the government’s guidelines of COVID-19, Rama Theatre Natya Vidya (RATNAV) staged the play on Friday evening in collaboration with The Austrian Embassy, The Austrian Cultural Forum, The Embassy of the Czech Republic, and supported by Sideways Consulting. Salman Khurshid, Former Minister of External Affairs of India was a special guest and he was supportive of the fact that the theatre is returning to Delhi.

Giraftari is an adaptation of Franz Kafka’s popular novel ‘The Trial’. It is the story of a common Indian man in contemporary Delhi, who has become alienated from society. The director has used a combination of moribund Indian oral and folk forms in the play. The play included art forms ranging from Keerat from Rajasthan to Tasha Dhol and Nafiri instruments from the streets of Purani Delhi. Hence, the play had a lot of dramatics and theatrics.

Rama Pandey, Writer, Director and Actor of ‘Giraftari’ said, I am so happy that I could share my love for theatre because theatre is life and If Kafka’s life has shown us anyting ,it is that one can be made to live in fear but one can still write fearlessly for themselves and the society they live in .Apart from government subsidies and support ,I would like to see the corporate private sector take a more active role in supporting the theatre scene in Delhi as well as India .Through sponsorships and ticketless shows making it approachable to a larger audience and also a younger audience who can benefit from connecting with the forgotten folk arts and artists and theatrical story telling .

Raimund Magis – Deputy Head – Delegation of the European Union to India said “The work of Franz Kafka has its own magic and his stories and the topics he touches upon are of universal appeal and relevance. The idea to translate his work into Indian languages and adapt it to a stage play has been developed many years ago in a conversation with Rama Pandey. To see how this creative spark has further developed and that the performance of her play ‘Giraftari’ gives me immense pleasure. I hope it will introduce Kafka and his important work to a broader public in India.”

H.E. Milan Hovorka – Ambassador of the Czech Republic said “Czech and Austrian Embassies are again jointly supporting the play not only because Franz Kafka was born in Czech Republic (that time Bohemia) and died in Austria but mainly because they consider Franz Kafka as one of the most influential European writers of the 20th century. Theatre is a great form of art in which actors and visitors can share their emotions in the most immediate way. I wish all visitors to enjoy the play.”

Matthias Radosztics from Austrian Embassy, New Delhi said, “I must applaud Rama Pandey for bringing Franz Kafka to the masses by virtue of adapting his famous work ‘The Trial’ into a Hindi play. A wonderful breakthrough; and now with the staging of Giraftari in Delhi, she together with the Austrian Cultural Forum has taken the initiative of bringing theatre back to life.”