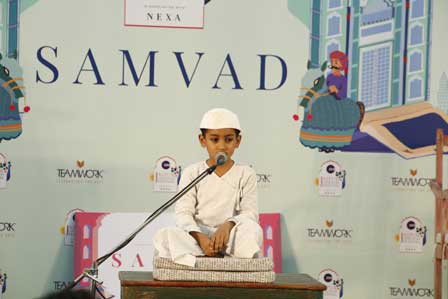 Jaipur: Day three of ZEE Jaipur Literature Festival 2019 began with a soulful performance by vocalist Vidya Shah creating a beautiful atmosphere with her melodious voice. Much in contrast, the sessions that followed presented challenging and thought-provoking discussions on a number of issues at the forefront of the national and global psyche.

Keeping up with the festival’s reputation for political engagement, senior journalist, author and news-anchor Rajdeep Sardesai engaged in a passionate discussion about the changing nature of journalism in India, with Madhu Trehan, co-founder and Editor-in-Chief of Newslaundry. Sardesai urged people in the journalism ecosystem to work for the cause of genuine news, and not for other purposes like “expanding their business empire”. The session concluded with an equally concise and sensational audience Q&A: “People in India don’t want you to take on the system. 90% of this country are establishmentarian in nature,” Sardesai concluded, pressing for people to play a greater role in bringing out change.

Marking his debut at the ZEE Jaipur Literature Festival, the American writer Andre Aciman – author of the bestselling novel Call Me by Your Name, which was adapted to a critically acclaimed film in 2017 – spoke to Siddharth Dhanvant Shangvi about romance, writing, and the book that made him a household name. “I wanted to avoid the typical challenges of a gay love story,” said Aciman. Instead, he wanted to delve into the depths of his characters’ inner worlds: “Elio’s shame is that of wanting someone else, not necessarily wanting someone of the same sex. It’s the shame of desiring someone you have not spoken to, someone who doesn’t know you… that shame is devastating.”

The session Creativity and Conscience grappled with the challenging question of whether or not a creation must be separated from its artist – a question which has plagued many an art enthusiast amidst the #MeToo movement. The panelists debated whether one would still consume a piece of art if they found out that the artist had committed a legal or moral offence. Author and commentator Gurcharan Das was of the view that it is the consumer’s problem if they disagree with the creator’s beliefs or actions. On the other hand, writers Pragya Tiwari and writer and Veena Venugopal made the argument that the life of an artist often becomes a part of the mythology surrounding them, which leads to people putting them on a pedestal.