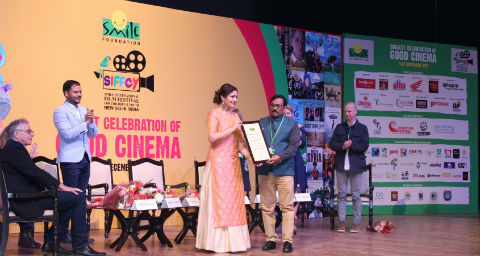 Speaking on the occasion, Ms. Raveena Tandon said, “I am so thankful to all of you to be here on the inauguration morning on the very own SIFFCY, it is something that is to be very proud of children that there is a film festival, that is only and wholly for children. I want kids to take a vow that whatever they will learn from here, they will follow in their daily life. Movies are the best media to educate our children, so I also want to thank SIFFCY which has acted as a media to communicate goodness to our children, as it is the right time to educate them what is good and what is bad for them”.

Mr. Santanu Mishra, Executive Trustee of Smile Foundation & Chairman – SIFFCY said, “I hope through SIFFCY, we will be able to channelize the energy of children and youth in a positive way and engage them proactively in the process of initiating social change. The idea behind SIFFCY is to design a rich mix of film programmes to build and support the growing interest in the infotainment industry. This includes programming that cultivates an audience for World Cinema while supporting filmmakers in career development, so that this powerful medium can be explored in a more focused manner for disseminating serious yet effective social messages”.

“SIFFCY is a unique platform to encourage and support the growing interest in meaningful cinema among young, aspiring, independent people without any favouritism. This year we have been fortunate enough to have many international partners, who have extended their support towards our initiative to entertain, engage, educate & empower the children & youth through various cinematic experiences & related capacity building workshops. We have scheduled Panels discussions & forums on ‘Environment & Climate change’, ‘Road Safety’, ‘Like Skill development’ and Role of Cinema, apart from the regular technical workshops by industry experts on Film making, Cinematography, Sound design, Production design, Storytelling & Photography” added Mr. Jitendra Mishra, Festival Director – SIFFCY.

The Indian production ‘Village Rockstars’ by Rima Das, was chosen as the opening film for the week-long festival besides ‘Cloud boy’, a joint production by Belgium, Sweden, Norway, Netherlands, directed by Meikeminne Clinckspoor. More than 100 films from over 30 countries will be showcased in this year’s festival that includes Feature Films, Non- Feature, Shorts and Documentaries, & Films made by Children. Spread over seven days, the festival will also showcase films like ‘The day my father became a bush’ a film about war through the eyes of a little girl, “‘Nafas” and “Glasses” from Iran. 25 shorts films made by children from across the globe will be showcased in the “Take One” section. Also, the festival will include workshops on Film Making, Photography, storytelling, art design and other capacity building activities. Amrit Pritam Dutta, award winning sound designer who is also in the Oscar selection committee this year, will be conducting the sound design workshop. The film program is curated by the founder of South Asian Children’s cinema forum Monica Wahi.

SIFFCY is a reflection of Smile Foundation’s efforts to use films as a medium for sensitizing masses, especially children and youth, and engaging them proactively in the process of bringing Social change.

Develop such literature in country which will impact masses: Prof. Sudheesh Pachauri