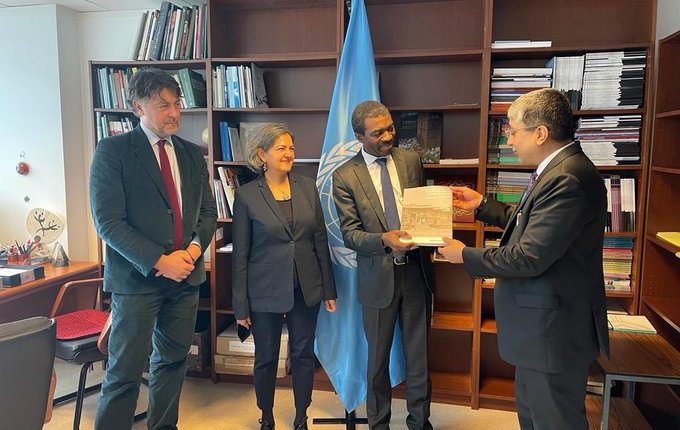 This is a great moment for India to see the Sacred Ensembles of the Hoysalas temples being submitted for inscription in the World Heritage List: G Kishan Reddy

New Delhi: The Hoysala Temples of Belur, Halebid and Somnathapura in Karnataka have been finalised as India’s nomination for consideration as World Heritage for the year 2022-2023. The ‘Sacred Ensembles of the Hoysala’ are on UNESCO’s Tentative list since 15th April, 2014 and represent one of the highest points of human creative genius and stand testimony to the rich historical and cultural heritage of our country.

The first step is submission of the dossier to the world heritage centre who will do the technical scrutiny of the same. Today, on 31st January 2022, Sri Vishal V Sharma, Permanent Representative of India to UNESCO formally submitted the nomination to UNESCO, Director of World Heritage, Mr. Lazare Eloundou.

Sri Vishal V Sharma, tweeted, “#India is proud to nominate The Sacred Ensembles of the Hoysalas for @UNESCO’s World Heritage List! Art historians recognize the exceptional sculptural artistry of the ensembles to be among the masterpieces of Asian art. @ASIGoI”

Once the submission is made, UNESCO will communicate back by early March. After that the site evaluation will happen in September /October 2022 and the dossier will be taken up for consideration in July /August 2023.

MDAE extends its academic collaboration with the Gokhale…

Sri G Kishan Reddy, Minister of Culture, Tourism and Development of Northeastern Region stated “This is a great moment for India to see the Sacred Ensembles of the Hoysalas temples being submitted for inscription in the World Heritage List”.

“The Government under the leadership of Prime Minister Shri Narendra Modi, is committed to both Vikas and Virasat. Our efforts in protecting our Virasat is evident from the work the government has been putting in inscribing both our tangible and intangible heritage and also repatriating the cultural heritage that was stolen or taken away from India”, the Minister added.

The sacred ensembles of the Hoysalas, built in the 12th-13th centuries and represented here by the three components of Belur, Halebid and Somnathapura, attest to the creativity and skill of the Hoysala artists and architects who built these masterpieces of a kind never seen before or since. The Hoysala architects used their profound knowledge of temple architecture in different parts of India to their advantage. The Hoysala temples have a basic Darvidian morphology but show strong influences of the Bhumija mode widely used in Central India, the Nagara traditions of northern and western India, and the Karntata Dravida modes favoured by the Kalyani Chalukyas. Therefore, the Hoysala architects made considered and informed eclectic selections of features from other temple typologies which they further modified and then complemented with their own particular innovations. The result was the birth of a completely novel ‘Hoysala Temple’ form.

MDAE extends its academic collaboration with the Gokhale Institute of Politics &…