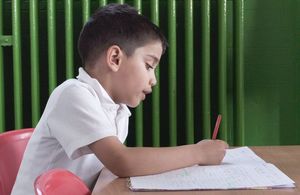 Over 6,500 schools have signed up for a programme to boost early language skills among Reception age children, with training provided for more than 22,000 staff.

The multi-million pound ‘catch up’ programme is set to raise outcomes in speaking and language skills for young pupils whose communication may have suffered as a result of missed time in education during the pandemic.

Interest in the Nuffield Early Language Intervention (NELI) has exceeded its initial targets of having one quarter of primary schools in England involved, with 33% already successfully registered. The programme now aims to reach around 40% of primary schools this academic year, backed by a £9 million investment. It is targeted at those pupils who need help most, with schools allocated places in priority order based on the proportion of disadvantaged pupils eligible for Free School Meals.

Pre-Reception children are also set to benefit from improved support as the Department for Education’s £20 million Early Years Professional Development Programme (EYPDP) moves into its second phase, deploying around 400 newly-trained early years ‘champions’ who have already been trained to share their skills, knowledge and behaviours with other staff in 51 local authorities to boost children’s development in early language, literacy and mathematics.

No child should fall behind as a result of lost learning time, especially in the crucial early years of their education. I’m so pleased to see thousands of schools sign up to this package of support to help our youngest children get back on track.

We want every child to thrive as they progress through school, which is why it’s vital we provide extra support in this challenging time to equip them with the important early language skills to express themselves clearly and effectively.

Nuffield Early Language Intervention will run as a 20-week intervention for pupils from February 2020. Schools will be provided with training and resources, free of charge, helping them deliver one-to-one and small-group support for five-year-olds whose early development in spoken language skills has been disrupted by Covid-19.

The investment is part of the National Tutoring Programme, a key part of the Government’s £1 billion Covid catch-up package announced in June, to directly tackle the impact of lost teaching time.

Josh Hillman, Director of Education at the Nuffield Foundation said:

The fact that one third of primary schools in England have already enrolled on the Nuffield Early Language Intervention (NELI) shows the significant demand for a programme to support disadvantaged children in their language skills, particularly in light of the lost learning due to COVID-19.

Having supported the development and trialling of NELI to provide evidence of its effectiveness we are delighted that the DfE has increased its target for the number of participating schools. Even more of the most disadvantaged children will be able to acquire the foundations of literacy and learning in this challenging school year.

Alongside the Nuffield programme, the Department has also confirmed that around 400 early years practitioners have completed high quality training to boost their skills in supporting young children’s early language, literacy and mathematics development in 51 local authorities, as part of its Early Years Professional Development Programme, first launched in 2018.

The Professional Development Programme is being led by the Education Development Trust who have designed the programme to ensure a large number of practitioners are able to learn and share excellent practice in early years language and literacy skills development.

The drive to help people gain professional skills builds on an announcement last week that the Government will fully-fund almost 400 courses for adults without a full qualification at Level 3 (A-level equivalent) from April 2021, including childcare and early learning courses for those wishing to enter or upskill within the early years sector.

During the pandemic, the Government has provided significant financial support to provide stability and reassurance for the early years sector – including paying local authorities for the autumn term for childcare places at the level we would have funded before coronavirus – regardless of how many children are attending.

Following the extension of the Coronavirus Job Retention Scheme, early years staff remain eligible to access this as they have been since its introduction. The Job Support Scheme has been postponed until the furlough scheme ends. Working parents on these schemes will still remain eligible for childcare support, including the 30 hours offer and Tax-Free Childcare, even if their income levels fall below the minimum threshold requirement.

European ‘comet chaser’ probe to be designed in UK