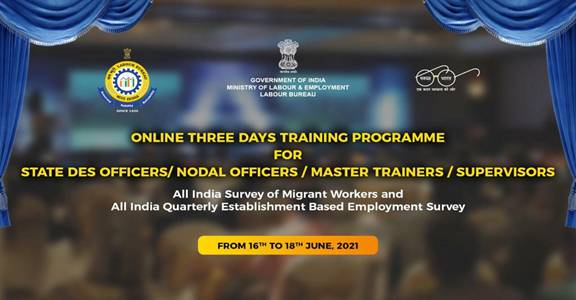 The training programme was inaugurated by Sh. DPS Negi, Director General (DG), Labour Bureau on the 16th June. This was followed by address of Prof. S.P. Mukherjee, Chairman, Expert Group. Prof. Mukherjee interacted with the participants through Video Conferencing and elaborated them about these Five All-India Surveys and its importance.

Shri Negi also briefed the participants about the surveys and its operational modalities in the field and role of DES in coordinating and supervising the surveys. During the inauguration session Dr. Hardeep Singh Chopra, Dy. Director General, LB, and other Senior Officials of LB along with all the subject Matter Experts (SMEs) were present.

It was appraised to the participants that under these surveys, the data will be collected through tablets/ CAPI. In order to get quality and reliable data two levels of supervision checks have been kept in the IT enabled device. First level supervision will be done by supervisor level -1 hired by survey partner agency and same will again be scrutinized by the labour bureau officials and state level officials. Broadcast Engineering Consultants India Limited, the survey partner, is providing the IT as well as the HR support in conducting these pan India Surveys to Labour Bureau.

The training programme was divided into two parts of one & half day each. In the first part, training on All India Survey of Migrant Workers was imparted from 16.04.2021 to 17.04.2021 (till fore noon) and in the second part, the training of All India Quarterly Establishment Based Employment Survey (AQEES) was conducted from afternoon of 17.04.2021 to 18.04.2021. A special session was taken by the Experts on the Role of Second Level Supervisors.

The training programme was conducted through Video Conferencing using online platform. More than 700 participants attended the training in each day.

The training was imparted by the experienced trainers Subject Matter Experts (SMEs) and the senior officials of the Labour Bureau.

The main focus of the training was to make the participants aware and familiar about Labour Bureau, Objective and purpose of surveys, Method of conducting surveys, Roles & responsibilities during the surveys, Stakeholder involved in the survey the concepts & definitions used in the surveys. Apart from this, the trainers also elaborated on process of filling and checking the listing schedule, Hamlet group Formation, SSS formation and the process of filling and checking the detailed schedule of both the surveys.

Shri Apurva Chandra, Secretary, Ministry of Labour & Employment addressed the participants through video conferencing during the valedictory session of the training on 18th June 2021. Shri Chandra elaborated the importance of these surveys for the Government of India in order to make focused policies for the workers in the country. He also focused on the intention of the GoI for the betterment of the working mass in the country and the need of data for making such policies.

The training programme was of a great success and 700 plus officers/officials participants from States/UTs remained present and actively participated during all three days and the programme ended with the closing remarks of DG, Labour Bureau.

Wageningen University: Patents based on innovative plant breeding can contribute to more sustainability in agriculture