Three in a row – hat trick for brain electrodes

In order to study how the brain functions and to develop new technologies for treating neurological diseases, researchers at Lund University in Sweden have developed tissue-friendly and flexible microelectrodes that are roughly one tenth as thick as a strand of hair. Three of the doctoral students in the research team have just defended their theses.

The brain is the most complicated structure we know of and is behind our intelligence, creativity, thoughts, memories, feelings and senses. It has been likened to a computer, but this comparison falters given the fact we are not even close to understanding how the brain functions. A vital missing piece of the puzzle is tissue-friendly electrodes to listen to, and interact with, individual nerve cells connected to networks over a long period. It is this kind of electrode that Jens Schouenborg’s research team at Lund University have researched and developed over many years.

“We have taken decisive steps towards our goal of producing entirely biocompatible electrodes that do not disrupt the normal signalling between nerve cells in the brain tissue”, explains Jens Shouenborg, the professor leading research activities at the Neuronano Research Centre at Lund University.

To evaluate the new electrodes they use models for Parkinson’s – a disease that leads to the disintegration of nerve cells in a specific area of the brain. When this occurs, stimulation via implanted electrodes, often referred to as Deep Brain Stimulation (DBS), can be used as a treatment to reduce the motor symptoms that afflict patients.

There are challenges, however. It is often difficult to achieve a therapeutic result without side effects using the electrodes available today, in part because they are so large in relation to the areas of tissue being stimulated that it makes it difficult to avoid spreading electric currents to unintended areas of the brain. As inflammation and scar tissue (known as “foreign body reaction”) regularly form around such electrodes, stronger currents must also be used in order to have an effect.

It is this problem that the research team at Lund University have wanted to solve. Their concept is based on using many tiny microelectrodes that spread out as a cluster in the target tissue, before selecting the microelectrodes that offer a therapeutic result without visible side effects upon stimulation. 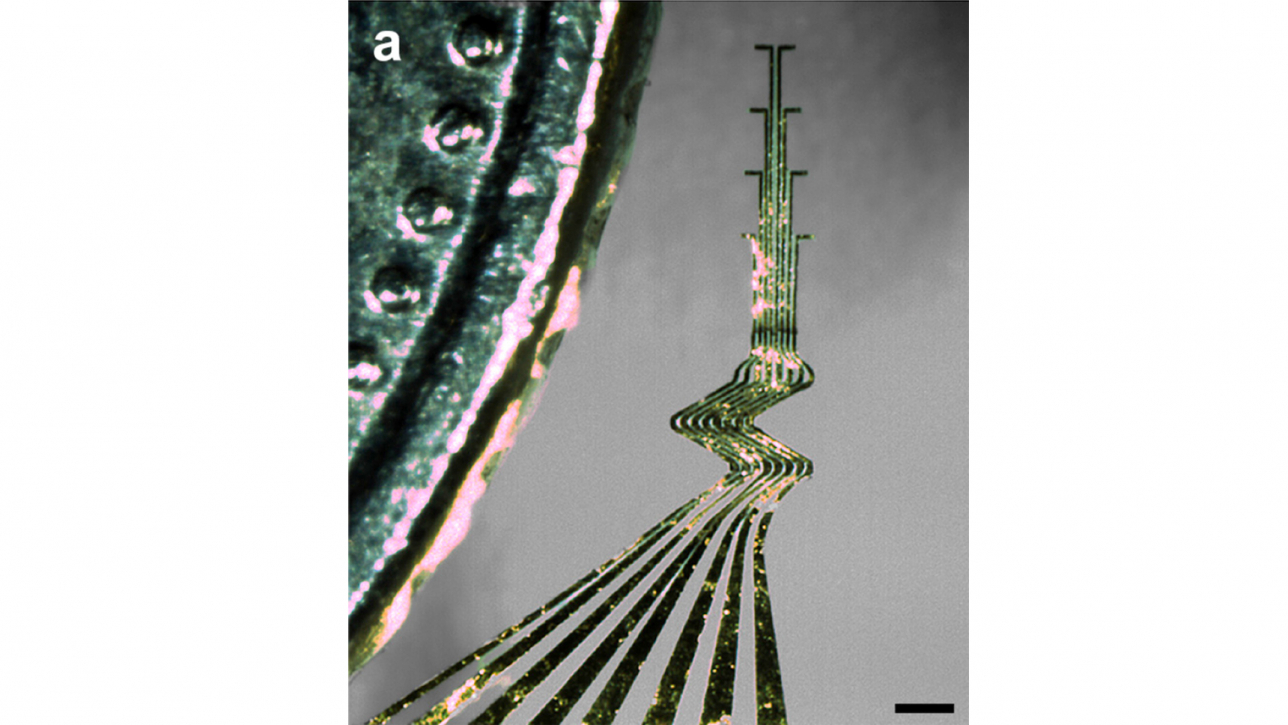 Electrode construction developed by the group – next to an English penny

Thanks to these electrodes, the researchers can get extremely close to the nerve cells, which means the current used does not need to be as strong, thus also reducing the risk of undesirable effects. But does it have a therapeutic effect?

“We are seeing an effect, to put it mildly. Particularly if we combine 4-8 microelectrodes in the cluster, and perhaps most importantly: we can avoid side effects. In the future this may mean it will be possible to tailor the treatment to each patient by testing different combinations in line with the target and symptoms; something we are now assessing in large animal models together with Neuronan AB and Jens Christian Hedemann Sörensen’s research team at Århus University Hospital.”

“As the electrodes are so flexible, they need to have support when being implanted. The research team has developed a technology whereby the electrodes are embedded in hard gelatine that dissolves after implantation and is then broken down by the enzymes in the brain. Gelatine is a very difficult and complicated material to manipulate, however,” sighs Schouenborg.

For example, it is easy for the electrode to become warped if there is even the slightest asymmetry during the drying process. But it has been worth the hard work – in the end we now have a solution that has a considerably smaller impact on the tissue than previous electrodes.”