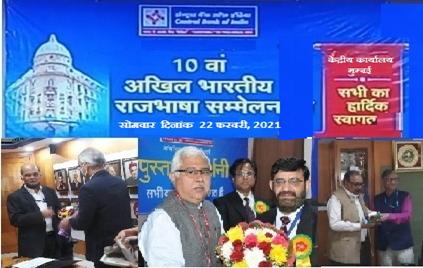 New Delhi:  Central Bank of India, a public sector bank with consecutive profits for last three quarters has received certificate of excellence for its Mumbai, Chennai and Patna zones in linguistic region A, B & C respectively for best Rajbhasa implementation at a digital Rajbhasha Conference in this week. It was the ’10th yearly All India Rajbhasha event in a row and 10 Rajbhasha Officers of the Bank awarded appreciation Certificates.

The Secretary, Rajbhasha Vibhag, Ministry of Home Affairs, Government of India, Dr. Sumit Jairath, IAS joined the conferenceas a chief guest at Bank’s Delhi Zonal Office. The conference was chaired by the Managing Director and Chief Executive Officer of the Bank, Shri Pallav Mahapatra at the corporate office. Executive Director of the Bank, Shri Alok Shrivastava and the General Manager Rajbhasha, ShriSmritiRanjan Dash and all the Field General managers, General Managers, Sr. Regional Managers and Regional Managaers also joined the E sammelan from different parts of the country. .

An attractive Rajbhasha Poster, a book of Hindi Essays ‘NibandhSurabhi’, the latest issues of house magazinesCentralite and Central Manthan of Corporate office, Mumbai along with 10 Books on various banking topics prepared by the Bank’s all 10 zones were released by the dignitaries during the event.

The Secretary, RajbhashaVibhag, Ministry of Home Affairs, Government of India, Dr. SumitJairath, IAS and other guests and invitees appreciated the hybrid event of Central Bank of India.