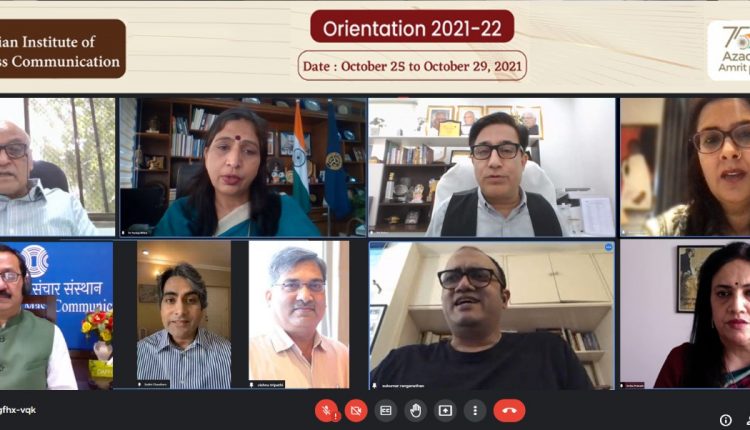 New Delhi : “India has a population that more than the sum total of around 50 countries in Europe and 26 countries in Latin America. India has the highest 20 percent youth and 6.34 crore MSME industries in the world. On the strength of this number, we have to convert India’s ‘economic challenges’ into ‘economic opportunities.” This view was shared by the former Vice Chancellor of Gautam Buddha University, Noida, Prof. Bhagwati Prakash Sharma on the third day of the orientation program of Indian Institute of Mass Communication (IIMC) 2021 on Wednesday. On this occasion, the Director General of IIMC, Prof. Sanjay Dwivedi, Additional Director General Shri Ashish Goyal, Convener of the program and Dean (Academic) Prof. Govind Singh, faculty members and students of all the centers of IIMC were present.

Speaking on the topic ‘Economic Future of India’, Prof. Bhagwati Prakash Sharma said that being self-reliant is the need of the hour. Multinational companies are increasingly occupying India’s production. Giving the example of the solar sector, he said that at one time many Indian companies used to manufacture solar panels, which were exported to European countries. But, as soon as China started selling cheap solar panels in India, these companies of ours suffered. He said that every Indian should promote the use of indigenous products.

According to Prof Sharma, if India has to become self-reliant, then its production capacity and exports will have to increase as compared to imports. Indian human resource is working all over the world in technical fields, but multinational companies take advantage of the technical product prepared by these people. This allows foreign companies to profit from Indian knowledge and talent. To stop this, India will have to go towards indigenous technology. He said that if we buy indigenous products, then it will not only benefit the Indian economy, but will also help in the development of technology.

Change will come from ‘Academic Bank of Credit’: Prof. Mittal

On this occasion the Secretary General of Association of Indian Universities Prof. Pankaj Mittal also addressed the students. Speaking on the topic ‘National Education Policy’, Prof Mittal said that the education policy of India is working to make its education system most modern and better for the students. The academic bank of credit system based on modern technology is going to bring a big change for the students. She said that just as a bank keeps the common man’s money safe, in the same way, the National Education Policy has given the option of awarding certificates, diplomas or degrees according to the credit earned by the students. Along with this, there is also a provision for students to study in not one, but many universities or institutes.

The need of the hour is to put the learned skills into use: Prof. Raj Nehru

In the second session of the program, the Vice Chancellor of Shri Vishwakarma Skill University, Haryana, Prof. Raj Nehru said that there is a need to work on how to put the skills that we have learned in the use of society. The technology and skills are available in India. India has a major contribution in the development of Silicon Valley. He said that every student should work on knowledge, skill and attitude. To make life better, students should learn new skills.

Advertisement should be in public interest: Manisha Kapoor

During the third session of the day, eminent journalists of the country addressed the students on the topic ‘Challenges and Opportunities of Journalism’. The Editor-in-Chief of Hindustan Times, Mr. Sukumar Ranganathan said that today technology has given a new power to the media. This is the golden age of journalism. Ms. Smita Prakash, Editor-in-Chief, Asian News International (ANI) said that today people form their opinion with little knowledge of social media. Media students should avoid this habit. The Editor-in-Chief of Zee News, Mr. Sudhir Chaudhary said that today innovation and technology need the utmost attention of the students. This is the basic mantra to be successful in journalism. Shri Vishnu Tripathi, Executive Editor, Dainik Jagran said that journalism is not just a business. When social concerns are strong in journalism, then only journalism has significance.

eKal to bring 45+ Indian, foreign universities at your doorstep