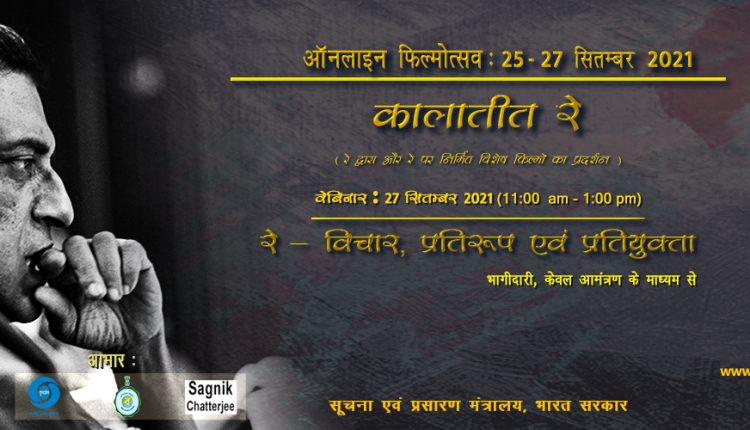 New Delhi:  Satyajit Ray and his films have left an indelible mark on the timelines of world cinema. Ray’s creative aesthetics and nuances of social realism resulted in creating many classics. To revisit the extraordinary cinematic imaginations of the master filmmaker, Film Division is presenting a film festival, Timeless Ray followed by a webinar, Ray – Ideas, Images and idioms. The three day virtual event from September 25 to September 27, 2021 is a part of the year-long Satyajit Ray centenary celebrations. The film festival will be streamed on Films Division website free of charges while participation in the webinar on Google Meet is by invitation.

The film festival, Timeless Ray will be followed by a webinar, Ray – Ideas, Images and idioms on 27th September. The speakers in the Webinar are Debasish Deb, illustrator and cartoonist whose published works include Rang Tuli’r Satyajit -a research work on the illustrations of Shri Satyajit Ray, Sagnik Chatterjee, a filmmaker known for scripting, directing and producing an international documentary, ‘FELUDA – A Sleuth’s Story’ on Satyajit Ray’s famous fictional character FELUDA, Amrit Gangar, film scholar, historian, critic and writer and Ashoke Viswanathan, filmmaker-theatre personality and Dean, Satyajit Ray Film and Television Institute. The webinar will be moderated by Joshy Joseph, filmmaker and Incharge of Eastern Region Production Centre, Films Division, Kolkata.

Films being showcased in Timeless Ray include, among others, a rare documentary made by him on Nobel laureate, Rabindranath Tagore, the one and only television film by Ray on a short story by Munshi Premchand and the much acclaimed, eponymous biopic by Shyam Benegal. The films scheduled in the festival are:
Rabindranath Tagore (Satyajit Ray/Films Division/54 Mins/1961) – the documentary shows the life of the greatest Bengali talent of all time, Rabindranath Tagore. It highlights the contribution of Tagore, his work in Bengali literature, poetry and painting along with formation of Visva-Bharati University.
The Inner Eye (Satyajit Ray/ Films Division /20 Mins/ 1972) – a film on the life and works of Benode Behari Mukherjee, one of the pioneers of modern Indian art who took up murals as a mode of artistic expression while remaining as a key figure in contextual modernism.

Creative Artists of India : Satyajit Ray (B.D. Garga/Films Division/14 Mins/1974) – one of the early documentaries on Satyajit Ray where the filmmaker narrates the process of his film making.
Satyajit Ray (Shyam Benegal/Films Division/132 Mins/1985) – over the course of two years, well-known film maker Shyam Benegal interviewed Satyajit Ray about his career and his vision behind filmmaking, resulting in the well-researched biopic on the legend.
Sadgati (Satyajit Ray/Doordarshan/52 Mins/1981) – a television film set on rural India which throws light on caste system in society.
Ray (Goutam Ghose/Govt. of West Bengal/105 Mins/1999) – a documentary that reveals the multi faceted personality of the Ray beyond just a filmmaker. Voice-over by Ray himself, clippings from his films and moments of Academy award ceremony are some of elements that make the film more than a biopic.
Sukumar Ray (Satyajit Ray/ Govt. of West Bengal/ 29 Mins/1987) – Ray made this film as a tribute to celebrate the centenary of his father and famous writer, Sukumar Ray.
Feluda – 50 years of Ray Detective (Sagnik Chatterjee/111 Mins/2019) – Felu alias Pradosh Chandra Mitter is one of the most popular fictional detective in India who turned 50 in the year of 2017. The documentary contains literary references of Feluda films, interviews of onscreen Feluda and other characters.

Films Division acknowledges the contribution of Ray Society, Govt. of West Bengal, Doordarshan and Sagnik Chatterjee for screening permission and also educational institutions, film schools and societies, zonal cultural centers and other screening partners for helping to take Ray’s works and legacy to the nook and corner of the country and abroad.

To experience the opus of Ray, the Poet of Indian Cinema, join Films Division by logging on to https://filmsdivision.org/Documentary of the Week and by spreading the word among cineastes.