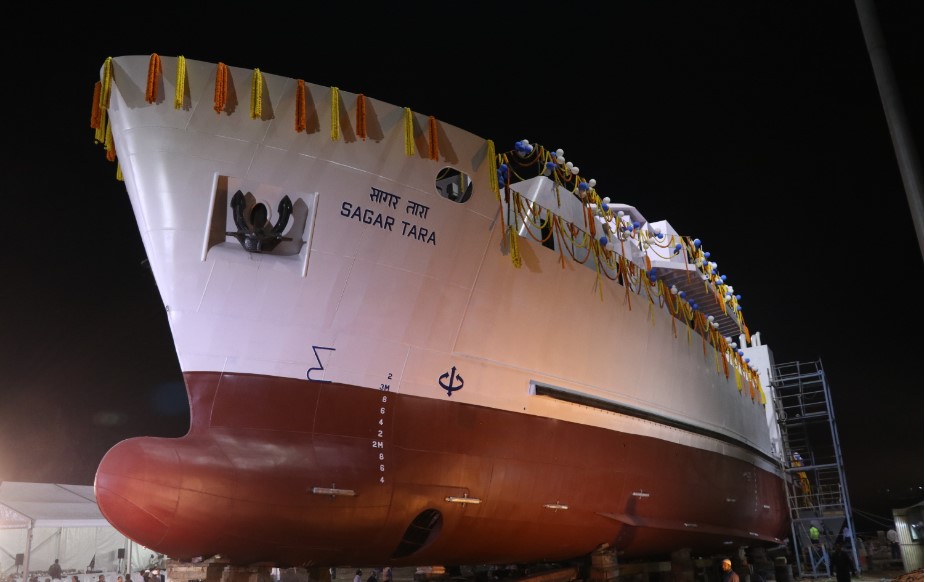 Kolkata: Titagarh Wagons Limited(BSE: 532966|NSE: TWL), a flagship company of the Titagarh Group, has reiterated its commitment towards the Government’s vision of ‘Make in India’, by successfully launching SAGAR TARA, the first of the Coastal Research Vessels being built for National Institute of Ocean Technology, Ministry of Earth Sciences, Govt. of India. This vessel was launched, today, 3 months ahead of schedule despite being a very complex platform which will enable scientists to conduct various oceanographic research missions aboard her.‘SAGAR TARA’ will housestate of the art laboratories equipped with modern scientific instruments. She features a Drop Keel which is designed and manufactured for the first time in the country. The vessel is equipped with auto pilot and is DP1 capable.

Dr. Harsh Vardhan, Hon’ble Union Minister for Ministry of Science & Technology, Ministry of Earth Sciences and Ministry Environment, Forest & Climate Change, Government of India commented, “This is by far one of the most remarkable developments in the history of India’s coastal research. Even more, when India’s private sector participation in partnering the Government is seen at an optimal high boosting the vision of ‘Make in India’. I congratulate each and every partner those who are associated with this project.”

Dr. Madhavan Nair Rajeevan, Secretary, Ministry of Earth Sciences, Government of India, Chairman, ESSO and Chairman, Earth Commission stated, “Augmenting Coastal and Oceanic Research capabilities of the country have always been a priority for the Indian Government. With this new vessel that NIOT will now proudly own, our research and exploration competencies will rise up further benefiting the country and her citizens in multiple dimensions.”

On this auspicious day, Mr. Jagdish Prasad Chowdhary, Executive Chairman, Titagarh Wagons Limited, stated, “Today at Titagarh, we have the unique distinction of launching three ships within a record time. The first of the two coastal research vessels for NIOT which was launched today will strengthen the research capabilities of Indian Maritime and Oceanic study. These research vessels are built with state-of-the-art technology and have most modern equipment fitted.

On behalf of the entire Titagarh Group, I thank the delegation from Ministry of Earth Sciences and NIOT who have graced today’s occasion and have inspired us to continue our mission of ‘Make in India’, by building quality ships for Government and Defence sector.”

In the next few months SAGAR TARA will undergo outfitting of accommodation areas as well fitment of scientific instruments in the laboratories. TWL aims to deliver the vessel to NIOT by May 2019 again almost 3 months ahead of schedule. The work on the second NIOT vessel is also under progress and TWL aims to launch it around mid 2019.

Mr. Umesh Chowdhary, Vice Chairman & Managing Director, Titagarh Wagons Limited, said: “TWL forayed into shipbuilding only last year with two significant orders from Indian Navy and National Institute of Ocean Technology for building four highly complex vessels. Our excellent team has been working non-stop to complete the projects in record time. It is a moment of great satisfaction that as a Company we are substantially contributing to India’s naval security and helping to augment research technology.”

The launch ceremony today, took place in the wee hours of the morning: at 3 am, when the draft was ideal for the vessel to be floated in the Ganges. From a key player in the railways, urban transport and defence sectors in wagon manufacturing, TWL has transformed into a diversified multinational making coaches for local trains, metro coaches, passenger trains and shipbuilding apart from special projects for India’s defence establishment. Titagarh Wagons is the only Indian Company to have access to technology for manufacture of Metro Coaches through its wholly owned subsidiary Titagarh Firema S.p.A in Italy.

Dr. M. A. Atmanand, Director of National Institute of Ocean Technology, stated, “The contribution made by Titagarh towards these highly complex and advanced technology vessels is a testimony of the company’s prowess in shipbuilding. On behalf of NIOT, I would like to congratulate the team of designers, engineers, technicians, quality controllers and the members of the overseeing team for their tireless efforts in successfully achieving this momentous milestone of launching Sagar Tara for coastal and marine research. These new ships are proposed to be utilized for shallow water operations [Surface Water Quality Monitoring (SWQM) Program, shallow water testing of various underwater components, Drugs from sea, Bathymetry survey of Exclusive Economic Zone [EEZ], Environmental indexing of ships and coastal zones etc.,] along entire Indian coast for the various programmes of MoES and will be a National facility for ocean research. These Ships are versatile ocean observing platforms equipped with advanced scientific equipment and mechanical handling equipment for oceanic survey, observations and explorations.”

Dr. D Rajasekhar, Project Director, VMC, National Institute of Ocean Technology, stated,” We are extremely happy by the sense of professionalism of the ship builder. The vessel built will be of immense importance to NIOT. We are sure that the team of scientists who would be responsible for conducting various coastal and marine studies out on this fine vessel will be extremely glad, by the platform built on this ship. Our team at NIOT is ready to make full use of the majestic vessel”.
Titagarh Wagons has already obtained new orders from Government of West Bengal for building small vessels and has participated in various tenders. These orders are likely to be from Indian Navy, Indian Coast Guard, Inland Waterways Authority of India, Shipping Corporation of India.

upGrad expands its MBA portfolio; partners with Swiss School of Business and…

RWTH: “DECISION NAVI” from RWTH Aachen University can be used free of charge

University of Freiburg: Expand and facilitate data access for materials…

iednewsdesk Oct 28, 2021
If you want to find the optimal materials for a particular application – whether it’s a rotor blade for a wind…

RWTH: “DECISION NAVI” from RWTH Aachen University can be used free of…

University of Tübingen: Changes in brain activity in Rolandic epilepsy…