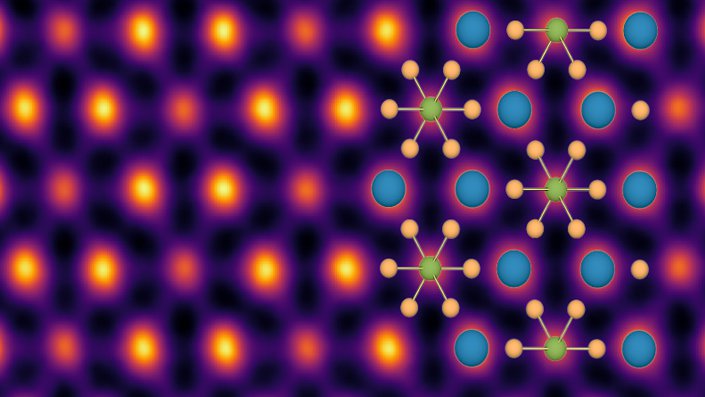 Researchers discover why a perfect crystal is not good at conducting heat, although it seemingly should be

The crystalline solid BaTiS3 (barium titanium sulfide) is terrible at conducting heat, and it turns out that a wayward titanium atom that exists in two places at the same time is to blame.

The discovery, made by researchers from Caltech, USC, and the Department of Energy’s Oak Ridge National Laboratory (ORNL), was published on November 27 in the journal Nature Communications. It provides a fundamental atomic-level insight into an unusual thermal property that has been observed in several materials. The work is of particular interest to researchers who are exploring the potential use of crystalline solids with poor thermal conductivity in thermoelectric applications, in which heat is directly converted into electric energy and vice versa.

This high-resolution scanning electron microscope (SEM) image of BaTiS3 crystals is overlaid with illustrations showing the orientation of individual atoms in the crystal. Despite the atomic perfection of the crystal, it is unexpectedly poor at transporting thermal energy.Credit: Caltech/USC/ORNL

“We have found that quantum mechanical effects can play a huge role in setting the thermal transport properties of materials even under familiar conditions like room temperature,” says Austin Minnich, professor of mechanical engineering and applied physics at Caltech and co-corresponding author of the Nature Communications paper.

BaTiS3 belongs to a class of materials called Perovskite-related chalcogenides. Jayakanth Ravichandran, an assistant professor in USC Viterbi’s Mork Family Department of Chemical Engineering and Materials Science, and his team have been investigating them for their optical properties and recently started studying their thermoelectric applications.

The overall effect of this absorption and emission of vibrations is that energy is scattered rather than cleanly transferred. An analogy would be shining a light through a frosted glass, with the titanium atoms as the frost; incoming waves deflect off of the titanium, and only a portion make their way through the material.

Two-level systems have long been known to exist, but this is the first direct observation of one that was sufficient to disrupt thermal conduction in a single crystal material over an extended temperature range, measured here between 50 and 500 Kelvin.

The researchers observed the effect by bombarding BaTiS3 crystals with neutrons in a process known as inelastic scattering using the Spallation Neutron Source at ORNL. When they pass through the crystals, the neutrons gain or lose energy. This indicates that energy is absorbed from a two-level system in some cases and imparted to them in others.

“It took real detective work to solve this mystery about the structure and dynamics of the titanium atoms. At first it seemed that the atoms were just positionally disordered, but the shallowness of the potential well meant that they couldn’t stay in their positions for very long,” says Michael Manley, senior researcher at ORNL and co-corresponding author of the Nature Communications paper. That’s when Raphael Hermann, researcher at ORNL, suggested doing quantum calculations for the double well. “That atoms can tunnel is well known, of course, but we did not expect to see it at such a high frequency with such a large atom in a crystal. But the quantum mechanics is clear: if the barrier between the wells is small enough, then such high-frequency tunneling is indeed possible and should result in strong phonon scattering and thus glass-like thermal conductivity,” Manley says.

This research was supported by the Defense Advanced Research Projects Agency, the U.S. Department of Energy, the Office of Naval Research, the National Science Foundation, the Army Research Office, the Air Force Office of Scientific Research and the Link Foundation.