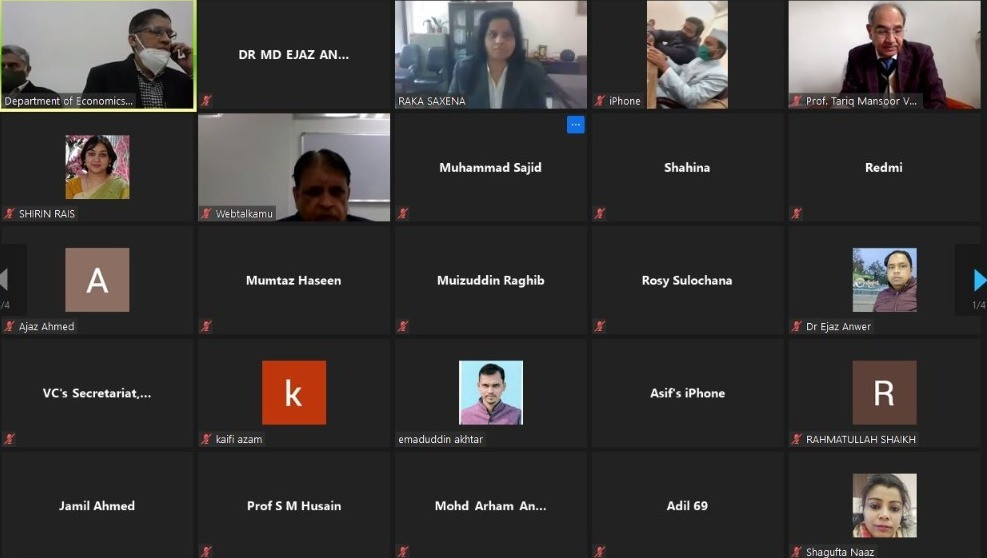 To commemorate the Centenary Celebrations the department of Economics, AMU is organising WebTalk series

Dr Raka Saxena delivered informative WebTalk covering multiple aspects of agricultural trade in India. Dr Saxena who is currently working on Indian Prime Minister’s dream project of ‘Doubling of Farmers Income by 2022-23 in India’, focussed her talk on the trends, composition, direction, competitiveness, trade openness and the methodological issues involved in dealing with trade in agricultural products in India. She also revealed comparative advantage, trade openness and simulation. Dr Saxena explained the situations where partial and general equilibrium approaches can be used. She opined that for general equilibrium analysis more data is required. She further appreciated the Government of India’s Agri-Export Policy-2018 which will help in overcoming the issues faced by Indian agriculture. Dr Saxena in her WebTalk, laid stress on the importance of exports in raising farmer’s income thereby, helping in achieving the goal of ‘Doubling of Farmers Income by 2022-23 in the country”.

Vice Chancellor Prof Tariq Mansoor in his address said that there is a lot of scope of increasing exports of agricultural products from India to the West Asian Countries particularly to the Gulf Countries mainly due to geographical proximity with these economies. He viewed that the quality of the agricultural products plays an important role in determining the demand in the international market and emphasised on the need for the modernization of Indian Agriculture.

The Chairman, Department of Economics, Prof Md Abdus Salam, in his introductory remark acknowledged the efforts and vision of the founder Sir Syed Ahmad Khan towards the educational enlightenment of the entire community. Referring to the continuous improvement in the educational ranking of the AMU, Prof. Salam commended the valuable contributions of Vice Chancellor for his efforts in diligently leading AMU on the path of educational excellence, which is reflected in its ranking. He also informed that the objective of Department of Economics is not only to provide educational empowerment but to have a holistic development of the students towards human capital.

Prof Nisar Ahmad Khan, Dean Faculty of Social Sciences, explained that the size of the country plays a significant role in the agricultural exports of countries and India need to focus on this aspect since many small countries are having much higher exports than India. Prof. Khan emphasised on the need for the diversification of the agricultural sector.

Prof Shahroz A Rizvi (Department of Economics) paid vote of thanks.