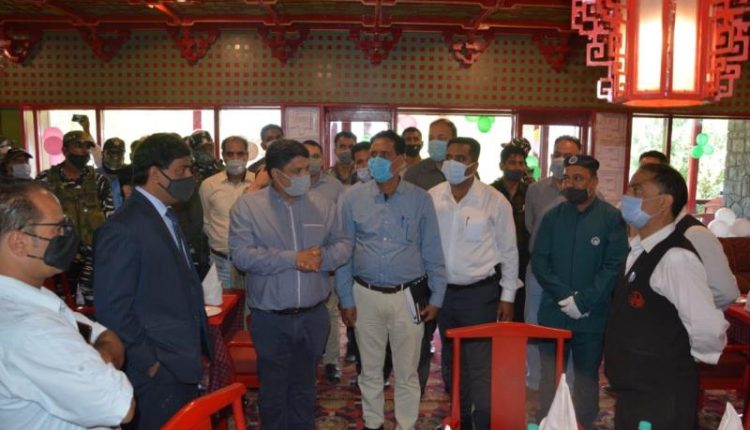 SRINAGAR : The Department of Tourism celebrated the World Tourism Day today with events like adventure, culture, sanitation and awareness activities marking the day.

In this regard the main event was held here where Chief Secretary, Dr Arun Kumar Mehta flagged off several tourism promotional activities. The day also saw events at all the major destinations and even at the offices of the Tourism Department outside J&K.

At the Royal Springs Golf Course, the Chief Secretary flagged off an all girls trekking expedition comprising some 30 girl students, Sky running expedition(running competition upwards hills) consisting of 30 members besides a cycle rally to Astanmarg, Harwan.

On the occasion, Dr. Mehta said that it is the continuous endeavor of the government to vaccinate the whole adult population of J&K. He expressed his satisfaction over the cooperation extended by the general public in curbing the coronavirus.

Mehta further said that the government has decided to promote 75 lesser known tourist destinations while maintaining that the UT has tremendous potential in tourism and there are other locations that have equal appeal but need promotion and raising of tourism related infrastructure. He said that night flights at Srinagar and Jammu airports along with other measures would give tourism in J&K a major fillip.

The Chief Secretary said that tourism trade has picked up during the past few months. He said that it is a good sign that people are visiting this place as both the appropriate behavior and vaccination of tourism stakeholders has been carried out beforehand.

On the occasion, Dr. Mehta also interacted with the members of all the adventure groups taking part in today’s rallies. He encouraged them to make trekking, cycling, hiking and other adventure related activities their zeal as these activities add color to life.

Later the Chief Secretary also flagged off a shikara rally in the world famous Dal lake to celebrate the day.

The day also marked the opening of the refurbished Nun Kun restaurant on the foothills of Zabarwan mountains on Dal banks by Dr. Mehta. The restaurant is famed for its specialised Chinese cuisine and with its refurbishment the ambience and facility at the restaurant has been scaled to new levels. He asked the tourism authorities to market the facilities available therein so that people get aware about it. He asked them to exploit both the location and infrastructure upto the maximum.

The Chief Secretary also e-launched the Covid safe tourism campaign to spread awareness about Covid-19 and the precautions to be followed while conducting business. He also e-launched 19 multilingual tourism promotional brochures in five major languages including English, Hindi, Gujarati, Marathi and Bengali. This was a major demand by the tourist community which has been met by the Department today.

Later in the day, the Tourism Department hosted a group of tourists from Mudurai, Tamil Nad who were all praise for the comfortable stay here.

In the evening a Cultural function was held at Kongposh restaurant, Rajbagh where artists enthralled the audience with their scintillating performances. A painting competition was also held on the occasion.

Secretary, Tourism & Culture, Sarmad Hafeez, Director Tourism, GN Itoo and other officers and officials besides a number of tourists were present on the occasion.

The day was also celebrated by the Department at many other places. At Srinagar International airport tourists arriving today were received in a traditional way by the staff of the Department posted there.

At destinations like Gulmarg, Pahalgam, Sonmarg, Doodpathri, Yousmarg, Verinag, Nigeen Club and other destinations cleanliness drives, awareness campaigns, trekking expeditions and other activities were held by the Department to mark the occasion.

People in large numbers including many tourists attended these functions.

The offices of the Department situated outside including Kolkatta and New Delhi also celebrated the World Tourism Day today.