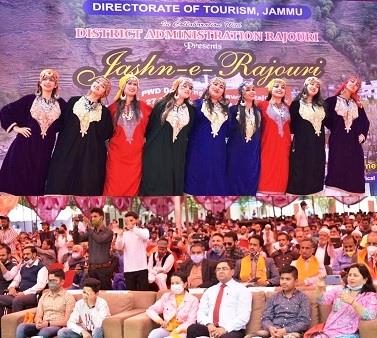 The event was organised under the overall supervision of Deputy Commissioner, Rajesh K Shavan who was also the chief guest on the occasion.

The confluence of local art, craft, culture, folk dances with other tourism products depicting the culture and traditions of Jammu and Kashmir UT in general and Rajouri, in particular, were the main attractions of the event.

Artists from different parts of J&K UT as well as from parts of Punjab and Himachal Pradesh performed to enthrall the audiences at the event. The local artists performed in Gojri, Pahadi and Dogri. Special screening of small videos showcasing the beauty and tourism potential of the Peer Panjal area was conducted during the event.

The resource persons from different departments including horticulture, tourism, handicrafts, handlooms and others had installed their stalls to generate awareness among the participants about several schemes and programmes being implemented in the district and motivated them to avail the benefits of the same.

The grand event was an attempt by the department of tourism to revive the tourism activities post COVID19 and also to promote different tourism destinations vis-a-vis the Peer Panjal region especially the local culture, art forms, heritage tourism, rural tourism and adventure tourism among others.

The Deputy Commissioner, while speaking on the occasion, said that Rajouri district has a huge potential in the tourism sector with scenic beauty “Besides the district is an epitome of cultural harmony and many people of this Peer Panjal region have shown their calibre at National and International level” he added.

The Deputy Commissioner said that tourism can play a positive role in the social, cultural, economic and environmental development of a region and at the same time, tourism provides an important means to promote the culture of a region. He said that the aim for organizing the event is to harness the tourism potential of the district and to boost the local economy. He said that concerted efforts are being made to boost the tourism sector in the district and a slew of measures are underway to explore all the possibilities for tapping its potential to the full.