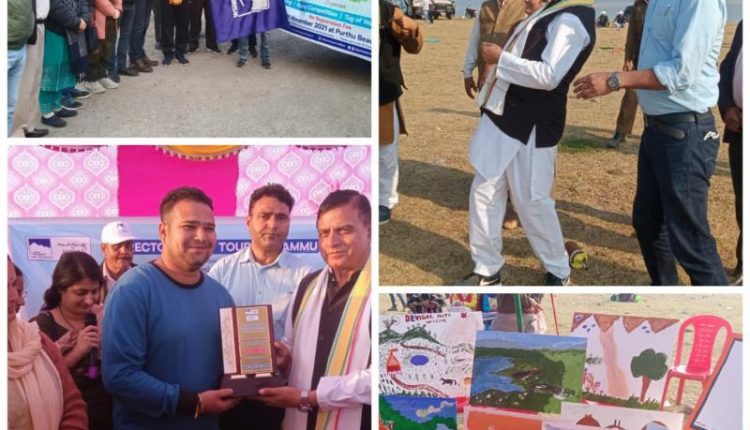 The festival being first of its kind was organized by the Directorate of Tourism, Jammu to bring Purthu Beach on the tourism Map and to showcase the diversity of tourism products of Jammu Division particularly of Basohli region which it offers to its visitors.

Speaking during the Flag off ceremony at Kala Kendra, Jammu Mayor, Municipal Corporation, Jammu, Chandermohan Gupta said that the festival is being organised to showcase potential in recreational tourism and sports in Basohli region. He appreciated the role played by the UT Administration and Tourism Department for organizing such types of events. At Purthu Beach a series of activities like Tug of War, Kite Flying competition, Musical Chair, Painting Competition were held. A total of 130 participants were registered for different activities.

It is worthwhile to mention here that a team of media persons was specially taken to Basohli by the Directorate of Tourism Jammu to give wide coverage to the event and to promote Basohli as a Tourism Destination.

The participants were mesmerised with the natural beauty of Crystal clear waters of Ranjit Sagar Dam and its cool breeze and scenic beauty. The Participants desired to conduct more such activities in near future at Basohli to bring the area on the National Tourism Map.

Speaking on the occasion Col. Mahan Singh said such activities should be held regularly so that Kathua is well promoted amongst all segments of travelers.

In the end, certificates and trophies were awarded to all participants and winners. In tug of war competition, Team FCI won the first prize, while Monika Chauhan baged first prize in painting competition.