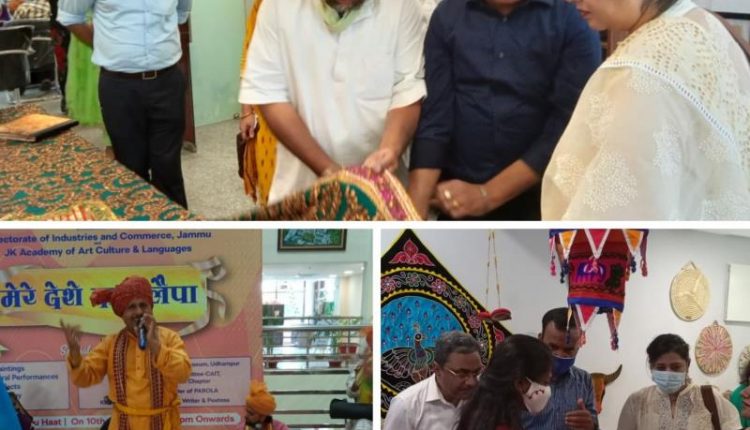 JAMMU : Directorate of Tourism Jammu in collaboration with Directorate of Industries and Commerce Jammu and Academy of Art Culture and Languages organised an Exhibition on Culture of Jammu Division namely “Mere Deshe Da Shailapa” here at Jammu Haat as part of Navratra Festival celebrations.

Director Tourism Jammu, Viveknanda Rai, briefed the media that such exhibitions attract visitors. He said such events will be held as a regular feature to benefit the local artisans and evolve Jammu Haat as a hub of cultural activities where people can enjoy a varied number of activities.

Anoo Malhotra, Director I&C, Jammu said “Events like this give local craftsmen an opportunity to showcase their unique art and provide them a marketplace besides giving the public a chance to appreciate their skills”

The exhibits offered a range of art work which offered the visitors a glimpse of Jammu’s rich cultural heritage and lifestyle of its people.

Director Tourism Jammu, Director Industries and Commerce Jammu and Director Handlooms/Handicrafts Vikas Gupta inspected the stalls and photo exhibition depicting old monuments, stone tools, ancient instruments, manuscripts, Basohli Paintings, Binnas, etc. Also adding to the delight was live ethnic music and folk Song/dance like Bakh,Geetru etc which was being performed by local artists. The entry gates of Jammu Haat were decorated with Rangolis made up beautifully and artistically with natural and herbal colours which are made especially for the “Rut Raade Dogra festival” and ladies were seen singing the traditional songs. One could also enjoy local cuisine like dal madra, bhatura, meethe Chawal, Rajmash, ambal etc being offered by JKTDC.

This was the second event which was held in Jammu as part of Navratra Festival celebrations being held in Jammu for the first time. Among others present were Arvinder Singh, Additional Secretary JKAAC&L, Natasha Kalsotra , Joint Director Tourism Jammu, Subah Mehta, GM DIC Jammu, Naresh Kumar, Deputy Director Tourism Jammu and other officers/officials of Tourism Department and Industries and Commerce Department.