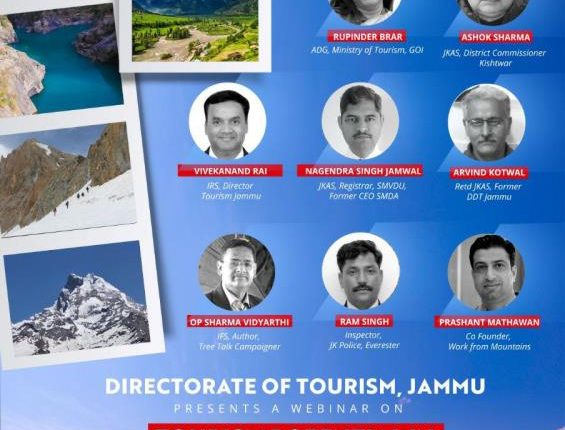 JAMMU : Directorate of Tourism, Jammu today hosted its maiden webinar to unveil the tourism potential of Kishtwar, anciently known as Kashtavata, and presently the biggest district in the Union Territory of Jammu and Kashmir.

Titled as ‘Tourism Potential in Kishtwar’, the webinar discussed the high degree of natural beauty and unique cultural encounters that a visitor can look forward to in this largely unexplored district.

The webinar began with the opening remarks of the Chief Guest, Rupinder Brar, Additional Director General, Ministry of Tourism, Government of India. She congratulated the department for taking the initiative, and also pointed out that there’s a lot that needs to be done.

She stated that Kishtwar is blessed with all physical geographical features and rich cultural heritage, and as such, has immense potential with regard to several types of tourism, ranging from nature to ethnic tourism.

“People these days love to be closer to nature and the trends like homestays are here to stay. Essentially, we need to work along with the local administration and develop upon connectivity, hospitality units, workforce quality and marketing strategy for Kishtwar. In addition to existing GOI initiatives like NIDHI, SAATHI, IITFC, we are planning roadshows and other promotional activities to flag and publicize the region extensively,” she said.

Kishori Lal Ji Sharma, Additional Deputy Commissioner, Kishtwar, gave an account of the formation of the district as in the modern times, its demographics and how the district came to be known as ‘Land of Sapphire, Saffron, and Shrines’.

“Kishtwar district is half of the whole Kashmir Valley. It is bound by the Great Himalayas in the North, marked by forests, waterfalls, valleys, meadows, and shrines, and has a calendar of cultural celebrations. It has all that is needed to capture people’s inherent interest and provide the drive for tourism, but yearns for sincere efforts from the Directorate of Tourism Jammu,” Sharma said, adding that the local administration is more than willing to facilitate any promotional initiative for Kishtwar.

Nagendra Singh Jamwal, Registrar, Shri Mata Vaishno Devi University, Former CEO, Surinsar Mansar Development Authority, highlighted the unique position that Kishtwar has in the History and Geography of the Union Territory of J&K and Ladakh. He referred to it as Mini-India and called for exhaustive content creation for the same.

“Kashtavata remained famous for its natural bounties including world famous Sapphires, timber and mountain passes across Himalayas to connect Ladakh and Kashmir with Jammu region,” he informed.

He added, “Kishtwar affords the best hiking treks in the UT, including the heritage treks on the routes undertaken by Wazir Zorawar Singh to reach Suru valley in Kargil and Ladakh through Zanskar over the Bhodkol La and Umasi La. It clearly defines and demarcates the geography of Jammu region through Chenab watershed.”

Arvind Kotwal, Retd, Former Deputy Director Publicity, started his talk with a time travel back to his experiences in Kishtwar. He focused on creating activities for tourists coming or would like to come, especially for leisure and adventure tourism, as it is high time the tourism potential of the region is fully realized.

“We are still discussing the tourism potential of this region, as in all these years, we haven’t been able to realize and market it. The USP of this region is extreme adventure, though every tourist wouldn’t want to try that. Do we have any leisure activity for them? Trials have already been conducted for paragliding, rafting, but we haven’t moved ahead with them. Also, there is rarely any factually correct and beautiful content created. The role of Tourism Department, and Kishtwar Development Authority comes into play here,” he mentioned.

Ram Singh, an Inspector in Jammu and Kashmir Police, who has to his credit the summit of Mt Everest, stressed on promotion of mountaineering and trekking opportunities in the region.

“Peaks in Kishtwar, including Brahma 1, 2, Agyasol and others, provide excellent climbing experience, and many foreign summiteers have won praise for the same. We need to give the region its due credit, and inspire others with our efforts to explore and sell it,” he said.

Prashant Mathawan, Co-founder, Work from Mountains, talked about the Historical and Cultural significance of Kishtwar as on the crossroads of the Western Himalayas.

“Kishtwar is a melting pot of cultures, yet forced to become just another name in the book. With concrete steps, such as development of Eco Friendly Experiential Tourism, improved connectivity, it can become a happening destination within no time,” he said and called for declaring Kishtwar High Altitude National Park as UNESCO Site.

The session was presented and moderated by Megha Sinha, a young anchor, and producer of national repute.