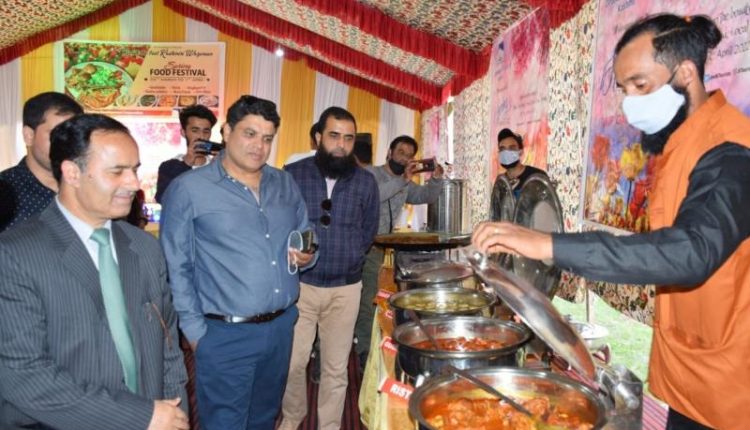 The festival is organised by Directorate of Tourism Kashmir to celebrate the Tulips, Folk Music, local cuisines and other cultural variety of Kashmir valley.

Speaking on the occasion, the Tourism Secretary said that cuisine, crafts and culture have been intrinsic components of J&K’s tourism which the Department has decided to showcase optimally in coming events. He said the Department would soon organize multiple food festivals to promote the concept of food tourism.

Highlighting about the overwhelming response to the food festival, Sarmad Hafeez said it was very good to know that even young generation of Kashmir have mastered the craft of ethnic food preparation. He added that the Department has also decided to provide a platform to creative entrepreneurs at this Spring Food Festival.

Sarmad Hafeez further remarked that the festival will also highlight the tourism potential of Jammu Kashmir valley across the world and enhance the experience of tourists visiting Kashmir during this season. He added that the weeklong food festival will also give chance for tourists and locals to taste different cultural cuisines and ethnic drinks.

The Tourism Secretary further said that the Srinagar city is emerging as cafe city of India and several cafes of city have also been roped into this festival to give a unique kind of experience to the visitors and tourists apart from traditional drinks and foods. He added that this festival will also give a platform to young entrepreneurs to establish themselves who are emerging as new face of vibrant Srinagar city.

Pertinently, the festival is aimed at popularizing the local ethnic cuisines and foods to give the tourists a feel of local culture and ethos besides keeping alive the fast disappearing ethnic recipes.

Javid Bakshi, Director, SKICC and other officers of the Department were present on the occasion.