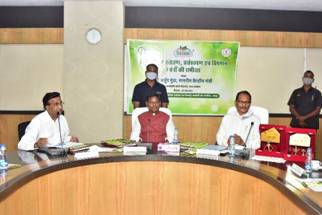 New Delhi: Minister of Tribal Affairs, Shri Arjun Mundabegan his two-day visit to the state of Chhattisgarh todayto review the progress of the implementation of the programmes being put in place for the empowerment of the tribals, such as MFP, VDVK and TRIFOOD.He is accompanied by Shri Pravir Krishna, Managing Director, TRIFED and other senior officials,

During the hour long meeting, the progress made by the State of Chhattisgarh with respect to the programmes that have been put in place by the Government such as the Minimum Support Price for Minor Forest Produce (MSP for MFP), Van DhanYojana, ESDP training for tribalswerereviewed by Shri Arjun Munda. Future plans to take tribal development to the next level were also showcased and discussed during this meeting.

Post this, the Tribal Affairs Minister left for Jagdalpur, where upon arrival, he inaugurated a new TRIBES INDIA showroom at the local airport. Speaking on the occasion, Shri Munda said, “TRIFED is continuing its work in focussing on improving the lives and livelihoods of the tribes in various aspects. In order to provide benefits to the tribal community of the State a special focus needs to be given to enhancing the quality, focussed marketing and strategic branding of the products. This is where the Tribes India network of outlets and e- platforms comes in. It is my pleasure today to inaugurate this TRIBES India showroom at Jagdalpur airport. I will also be inaugurating another one in ChandniChowk area. I am sure that these outlets will help in the marketing of the tribal handicrafts and handlooms and Van Dhan Naturals and immunity boosters.”The Hon’ble Minister then went on to the ongoing TRIFOOD project site in Jagdalpur to review the progress of the project. The Minister addressed a Van Dhan convention at the project site. It was attended by beneficiaries of over 10 VDVKCs. After his address, he even distributed the Van Dhan Natural awards, recognising the achievement of the tribal beneficiaries, artisans and forest gatherers.

Located in east-central India and one of the most fast developing states of the country, Chhattisgarh has a substantial tribal population, with 6616596 forest dwellers who constitute 32% of the total population. 44% of its land is under forest area even today. Bastar District, of which Jagdalpur is the headquarters, is located in the southern part of Chhattisgarh and is situated at a height of 2000 ft plateau from sea level. The district has an area of 4029.98 Sq km. Bastar has population of 834375 as per Census 2011, of which, male and female are 413706 and 420669 respectively. Of the total population, more than 40% belong to Gond, Maria, Muria, Dhruva, Bhatra, Halbatribes, etc.

The ‘Mechanism for Marketing of Minor Forest Produce (MFP) through Minimum Support Price (MSP) & Development of Value Chain for MFP’has come as a beacon of change in the past two years in this state.

Chhattisgarh has come up as a model state by procuring 91,208.69 Metrictonnes of Minor forest produces worth Rs 235.89 crores. The State of Chhattisgarh have a well-established set-up for procurement of MFPs across all Districts with around 4969 procurement centers being present. The State has also leveraged its extensive network of Van Dhan SHGs and VDVKCs. Under the Van Dhan Scheme total of 4170 VD SHGs have been sanctioned which are subsumed into 139 VDVK Clusters. This is benefiting 41,700 forest tribal gatherers in the State. These Van DhanVikasKendrasare being developed in strategically located villages to develop Clusters as focal points of growth.

In the State of Chhattisgarh, out of the 139 VDVKCs, 53 have entered into post-production stage and have achieved cumulative sales of Rs. 3.44 Crores. A noteworthy example is the VDVKC in Ghotiya, Jagdalpur which has been able to successfully process tamarind into products such astamarind brick, deseeded baheda and have able to sell them at Rs 100/kg. The VDVKC of AasnaJagdalpurhas been successfully able to produce multiple products such as candies, agarbattis and have been able to sell them around Rs 700-1000/ kg. Imli Chaska and Imli Candies being produced by tribal VD SHG members are currently upgrading their packaging with the help of ESDP training partners and these products are being marketed under Chhattisgarh brand.

To take these initiatives further, TRIFED has embarked upon setting up of TRIFOOD parks in Jagdalpur (Chhattisgarh) in convergence with MoFPI& NSTFDC. Being implemented by TRIFED, Ministry of Tribal Affairs in association with Ministry of Food Processing (MoFPI), TRIFOOD project, which was launched on August 20, 2020, aims to enhance income of tribals through better utilization of and value addition to the MFPs collected by the tribal forest gatherers.

The multi-commodity processing unit is the first of its kind to be established at Burundwara, Semra, Jagdalpur, Bastar, Chhattisgarh. It is targeting the improvement of the livelihood of tribal communities located at Chhattisgarh and nearby states of Madhya Pradesh and Andhra Pradesh. The primary objective of TRIFOOD projects is to provide modern infrastructure facilities for the processing of MFPs along the value chain directly from the farm and forest to the market. It will include creation of processing infrastructure near the tribal and forest areas. The main feature of the TRIFOOD Parks is to facilitate processing of locally available Minor Forest Products (MFP) collected by local tribals under Van DhanVikasKendras in the vicinity so that value addition of the MFPs can directly benefit the Van DhanVikasKendras aiming at socio-economic development in the tribal catchment areas and creating new livelihood opportunities throughout the year. TRIFOOD Projects will be demand-driven and will facilitate food processing units to meet all environmental and safety standards as per laws of the land.

Post the inspection and review of the TRIFOOD Site, the Minister proceeded to ChandniChowk where he inaugurated the second Tribes India Outlet in the city.

The itinerary for the second day includes a visit to the Dhuragaon VDVKC. It is hoped that with review, monitoring and implementation of the programmes at ground level, there will be an impact in generating income for the tribal people and empower them.

CBM India launches Sankalp, a co-operative to empower women and people with disabilities in Maharashtra