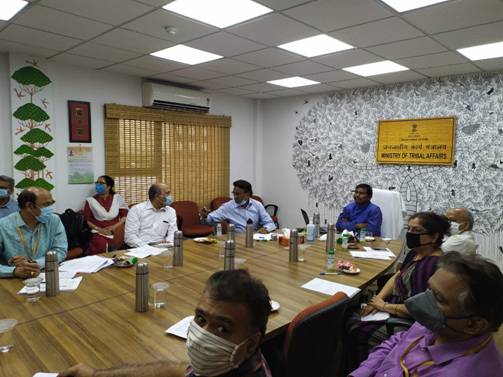 Addressing the participants, Shri Arjun Munda congratulated the States for supporting the tribal livelihood by stepping up procurement of Minor Forest Produce at the revised MSP.

Since 1st May 2020, when the MSP for MFP was revised for 50 items,  procurement to the tune of Rs 40 crores has been made by 17 States to the tune of Rs. 40 crore . Five more States will begin the process of procurement very soon. Shri Arjun Munda said that MFP has emerged as a prominent means of livelihood for the tribal population and the government is making all efforts to ensure that the tribals get true value for their products. He urged the remaining States  also to start the procurement of MSP quickly in right earnest.

The Minister for Tribal Affairs, Shri Arjun Munda also reviewed the working of Prime Minister’s Vandhan Yojana in the States. He said that value addition is required to connect tribal produce to the Global market which is a long-term vision of  the Prime Minister Shri Narendra Modi. The Vandhan Kendras and the infrastructure facilities required for value addition and marketing of tribal produce are being supported in States by the Ministry of Tribal Affairs and any other requirements of  the states in this regard will be fulfilled, he added. He also highlighted upon need to develop a Market chain to take the rural products of Organic nature to National and International markets.

Shri Arjun Munda  reviewed the arrangements being made by States for the tribal migrants and students who are returning home in the wake of situation created by COVID-19.

The Minister said that the push given to the Minor Forest Produce along with value addition and marketing through VDVKs as well as fair support price will prove to be a boon to generate additional livelihoods for the migrants who are returning home at this critical juncture.

The Minister of State for Tribal Affairs, Smt Renuka Singh  recommended the need for setting up of small scale units at village level to employ the tribal returnees from different States and on the need for taking advantage for inherent traditional knowledge among the tribals.

Various States expressed their gratitude to the central government for helping in generating livelihood and Employment for the tribal population through Vandhan Kendras, Self Help Groups and marketing of tribal produce. After having received very good initial results from Vandhan Kendras, almost all the states requested for the Vandhan Kendras to be doubled in their states. They also highlighted the varieties and benefits of  minor  forest produce available in their states and how the increase in MSP has facilitated procurement of MFP. Few states showcased the products being made by tribals in the wake of Covid 19 like hand sanitiser and face masks which are being supplied to local communities as well as state agencies like railways.

MD trifled Shri Krishna give a presentation on the performance of individual States with respect to setting up of Vandhan Kendras.

Sh Pravir Krishna disclosed that the procurement of Rs 40 cr  worth of MFP by state agencies has resulted in an  increase in market price of forest produce benefitting the tribals by additional Rs. 300 crore as a result of procurement  by private traders at the revised cost.

1205 Van Dhan Kendras have been set up across states, and have benefitted 3.75 lakh beneficiaries through 18075 Self-help Groups. Nearly Rs 166 cr rupees have been sanctioned for setting up the VDVKs till date.