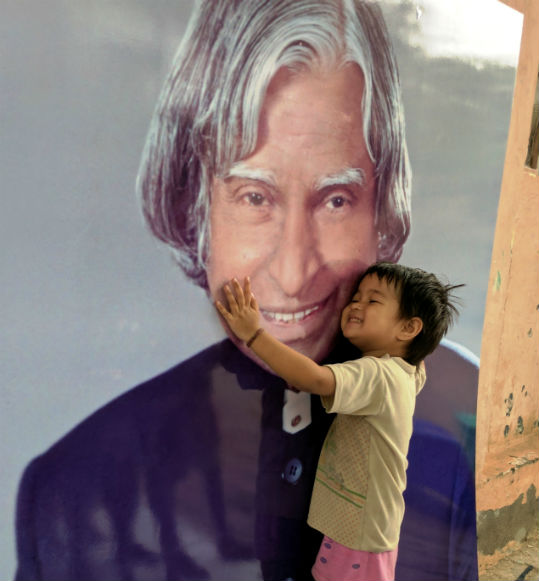 Tribute to Dr. APJ Abdul Kalam on his second death anniversary by the makers of “I Am Kalam” – Smile Foundation

New Delhi: Looking at the glorious chronicles of the life of our beloved Dr. APJ Abdul Kalam, it comes as no surprise that he was bestowed the luck of passing away while doing what he loved to do – teaching. “If people will remember me as a good teacher, that will be the biggest honour for me,” he had said in an interview to a national daily on Teacher’s Day the year before his death. https://www.youtube.com/watch?v=Fx36qYj4v5U

Born as Avul Pakir Jainulabdeen Abdul Kalam, Dr. Kalam has many extraordinary achievements to his credit. After India found its Missile Man in his scientific genius, the poet, writer, and Bharat Ratna awardee went on to head the nation as the 11th President of India from 2005-2007. However, his journey as a teacher went on unabated, as he continued to touch the lives and ignite the minds of everyone he came to meet. He was lovingly called ‘The People’s President’.

After his presidency ended, Dr. Kalam became a visiting professor at different branches of the Indian Institute of Management and was also an honorary fellow at Indian Institute of Science, Bengaluru. He made relentless efforts to travel across India to meet the children and youth, driving them to work for the benefit of the country at many academic institutions. In 2012, Dr. Kalam launched a programme for the youth of India called “What Can I Give”, based on the ideology of defeating corruption.

He had a penchant for interacting with the young minds of the country, and once, even famously posted a question on Yahoo asking what we should do to free our planet from terrorism. Touring innumerable schools around the country, he actively engaged thousands of children with whom he often shared anecdotes from his own childhood as a boatman’s son in Ramehswaram, citing examples from the struggles and experiences of his life. A man who rose to hold the highest office in the nation by the sheer virtue of hard work, he always encouraged the students to give better than the best to their goals.

His love and admiration for the generation of tomorrow were reciprocated with the same passion and he was indeed the apple of children’s eyes. Not only did he open the gates and lawns of Rashtrapati Bhavan to hordes of school students and children, but also took out time to listen to their ideas, give feedbacks and even followed up on occasions on the status of implementation. Memorabilia from such visits were shared by many at the time of his death, as the whole nation came together to flood in expressions of grief and pride at the same time.

Stanford University: Preventing the next pandemic from…

There was an incident where he surprised one of his staff members by taking his children to a science exhibition when the former could not do so himself due to work pressure. Another time when he was to attend a college event, he paid a surprise late night visit to the students of the organizing committee a day before and chatted with them for hours. These are just some of the many stories famous about the visionary that reflects on his special bonding with the children. I am Kalam, a children’s movie by Smile Foundation that won many hearts and accolades stemmed from the ideologies and vision he had for the children of the country.

He continued to share his vision with the medium of writing, something he loved to do and fervently pursued, till the end of his life, penning many books including his remarkable autobiography Wings of Fire.

Though his departure two years ago created a massive vacuum in the scientific community, and rendered the country a profound loss that cannot be compensated, it is the children of India who are going to miss him the most.

But never shall he be forgotten, for he will continue to live in our minds and hearts for generations and generations to come.

iednewsdesk Jun 22, 2022
A national COVID-19 screening and quarantine program developed for travelers coming into the U.S. had serious…