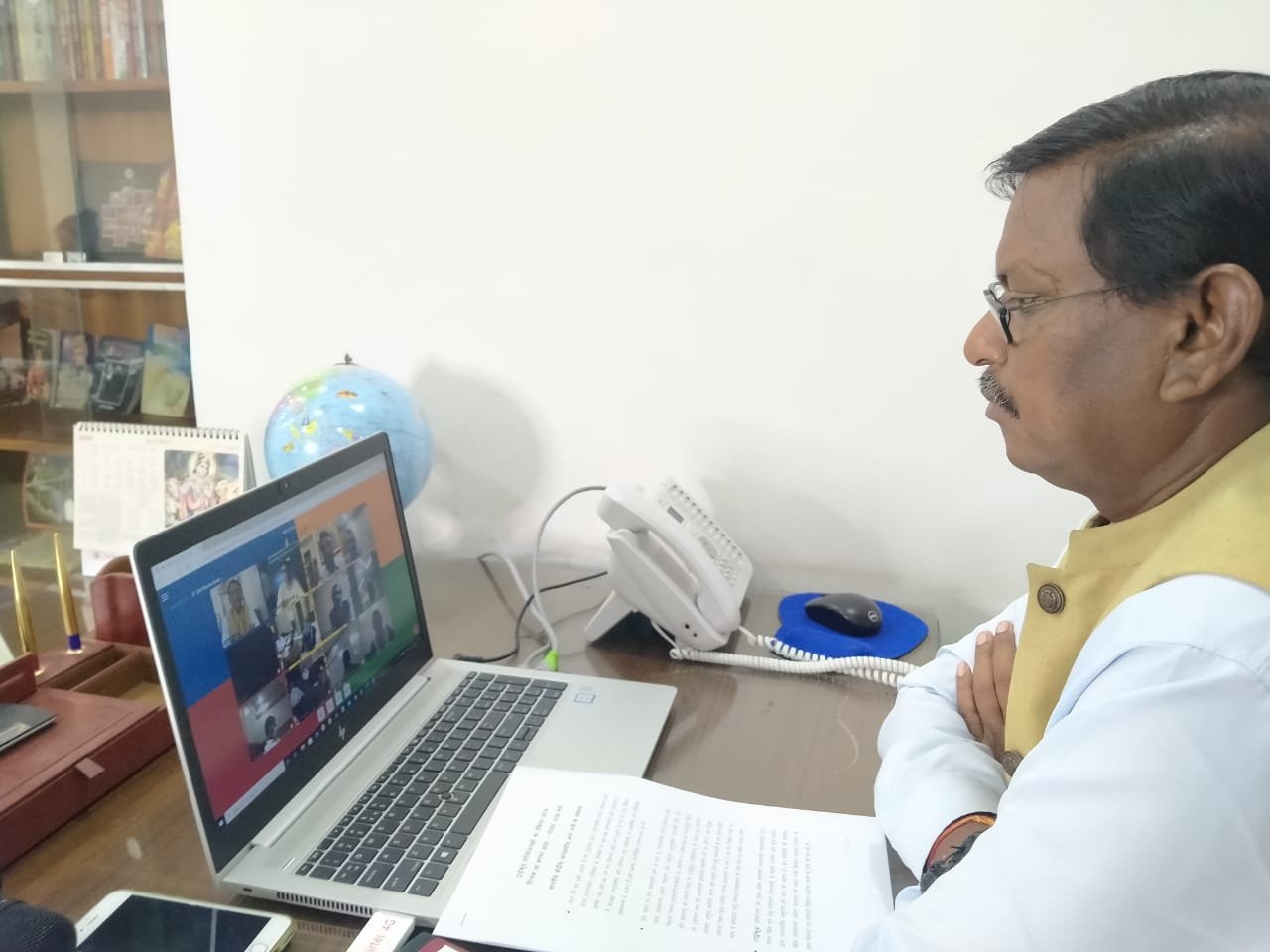 New Delhi: “Tech For Tribals” initiative was e-launched by TRIFED, Ministry of Tribal Affairs in association with Chhattisgarh MFP Federation and IIT Kanpur today. TRIFED, in collaboration with Ministry of Small and Medium Enterprises (MSME) under the ESDP programme commenced the ‘Tech for Tribals’ programme that aims at the holistic development of tribals with a focus on entrepreneurship development, soft skills, IT, and business development through SHGs operating through Van Dhan Vikas Kendras (VDVKs). The launch event, which was an online event, was attended by Shri Pravir Krishna, MD, TRIFED; Shri Sanjay Shukla, Managing Director, CGMFPFED; Prof Amitabha Bandyopadhyay, Prof-In-Charge, Incubator @ IIT Kanpur; Dr. Nikhil Agarwal, the CEO, FIRST IIT Kanpur; officials from TRIFED, CGMFPFED, and IIT Kanpur, besides the beneficiaries of the training programme.

During the 6 weeks training from 13th October to 7th November 2020, Van Dhan beneficiaries across all districts of Chhattisgarh State are being trained on various facets of micro-enterprise creation, management and functioning. This will be over a period of 30 days and will include 120 sessions. The training module has been developed by IIT, Kanpur and will be disseminated among beneficiaries in a phased manner through various modes like online lectures and trainings, online activities and will gradually move to face to face interactions in class rooms, practical, onsite visits and exposure visits.

The programme aims to tap the traditional knowledge and skills of tribals and add branding, packaging and marketing skills to optimize their income through a market led enterprise model by setting up of Van Dhan Kendras (VDVKs). TRIFED has so far sanctioned 1243 Van Dhan Kendras in 21 States and 1 UT involving 3.68 lakh tribal gatherers.

Dr. Nikhil Agarwal, the CEO, FIRST IIT Kanpur welcomed the participants of the Zoom call and the beneficiaries of the programme in his address.

Setting the rationale behind this unique initiative, Shri Pravir Krishna said that “Tech for Tribals initiative” is a unique program to make tribals of India “Aatmanirbhar”, focussing to bridge the gap between tribal entrepreneurs and urban markets. Under this initiative, TRIFED has tied up with reputed national institutions such as IIT, Kanpur; Art of Living, Bangalore; TISS, Mumbai; KISS, Bhubaneswar; Vivekananda Kendra, Tamil Nadu and SRIJAN, Rajasthan, for conducting Vandhan-ESDP Training Programs in the States of Chhattisgarh, Kerala, Karnataka, Maharashtra, Odisha, Tamil Nadu and Rajasthan.

He said that the TRIFED plans to subsequently start the Vandhan-ESDP Training Program in other States as well through other Training Partners using the training module developed by IIT, Kanpur, with minor modification as per local requirement. The “Tech For Tribals” Initiative is a major push towards tribal development and empowerment.

Shri Krishna also spoke about how over the past few months, aided by the Government push, the ‘Mechanism for Marketing of Minor Forest Produce (MFP) through Minimum Support Price (MSP) & Development of Value Chain for MFP’ has emerged as a beacon of change impacting the tribal ecosystem. The Van Dhan tribal start-ups, a component of the same scheme, has emerged as a source of employment generation for tribal gatherers and forest dwellers and the home-bound tribal artisans. These Van Dhan Kendras are micro tribal enterprises for processing and value addition of forest produces. The scheme is being further expanded to more locations under the ‘Vocal for Local Go Tribal’ initiative of TRIFED during the current financial year. TRIFED envisages the setting up of 3000 Van Dhan Kendras across 307 districts in 27 States.

Shri Sanjay Shukla spoke about the unprecedented success of the MFP programme in Chhattisgarh and how it has emerged as a Champion for its commendable efforts and how post this success, the “tech for tribals” initiative is the next logical step. Over the past few months, Chhattisgarh has procured 46,857 Metric tonnes of Minor forest produces worth a whopping Rs 106.53 crores. With the Chhattisgarh Government putting all its might behind the implementation of the MSP for MFP Scheme, the systems and processes for procurement are well in place across all districts. Chhattisgarh has 866 procurement centres and the State has leveraged its vast network of Van Dhan SHGs from the 139 Van Dhan Kendras effectively as well. Innovations adopted such as door-to-door collection of minor forest produces by mobile units comprising of forest, revenue and VDVK officials have contributed to these high procurement values.

In his address, Prof Amitabha Bandyopadhyay, Prof-In-Charge, Incubator @ IIT Kanpur, spoke about the skill development programme that will be run by IIT Kanpur and the technological transformation it is aiming towards. IIT, Kanpur will run the skill development program of tribal youth across Chhattisgarh to help them build their enterprise by commercializing the products using MFPs. This programme will mainly entail three aspects of development for sustainable entrepreneurship which can be considered as the three pillars – Engagement, Capacity Building, and Market linkages. This will lead to the path of commercialization of the tribal entrepreneurs. The course content/ modules developed are specifically relevant to Entrepreneurship in Value Addition and Processing of Forest Produces. This capacity building program is expected to ensure higher success rate of the Tribal Entrepreneurs by enabling and empowering them to run their business with marketable products with quality certifications.