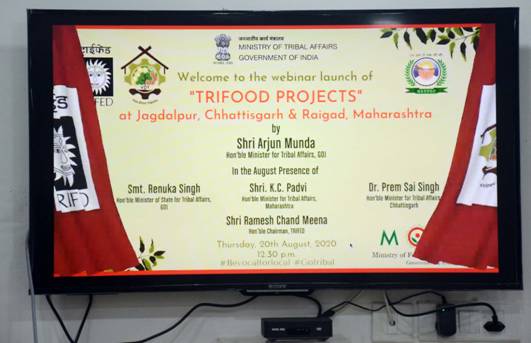 Being implemented by TRIFED, Ministry of Tribal Affairs in association with Ministry of Food Processing (MoFPI), TRIFOOD aims to enhance the income of tribals through better utilization of and value addition to the MFPs collected by the tribal forest gatherers. To achieve this, as a start, two Minor Forest Produce (MFP) processing units will be set up.

The unit in Raigad, Maharashtra that will be used for value addition to mahua, amla, custard apple and jamun and will produce mahua drink, amla juice, candy, jamun juice and custard apple pulp. The multi-commodity processing centre in Jagdalpur, Chhattisgarh will be used for the processing of commodities like mahua, amla, honey, cashew, tamarind, ginger, garlic and other fruits and vegetables. These would be made into mahua drink, amla juice, candy, pure honey, ginger-garlic paste and fruit and vegetable pulp.

Congratulating all those involved with this project, Shri Arjun Munda lauded their efforts in reviving the flagging economic condition of the tribal food gatherers. Airing his views on holistic development, he touched upon the aspects of the biodiversity of tribal life and how these should be preserved and enhanced. He said that this project will help in promoting tribal entrepreneurship. He lauded TRIFED’s efforts in particular in this project, which not only ensures that this bio-diversity is maintained but also forges backward and forward linkages, while promoting the development of the tribals. TRIFED, as the nodal agency for the upliftment of the tribals, has been putting in place several initiatives to alleviate their distress in these unprecedented times. He encouraged the officials working on this ambitious initiative on ground so that this can be replicated across the country. He opined that DMs and DFOs can play a very important role in tribal development.

Speaking on the occasion, Smt Renuka Singh Saruta also appreciated the joint efforts and the vision behind which such a fruitful initiative could be possible in the two neighbouring states. She added that she is hopeful that this initiative will bring in much benefits to the tribal populations in the two states. She hoped that these project will be extended to other tribal states also.

Shri R.C. Meena dwelt upon many such useful schemes and programmes of TRIFED for the betterment of lives of tribals and hoped that this project will serve its purpose in these two states.

Earlier, Shri Pravir Krishna, MD, TRIFED thanked the teams of TRIFED, Ministry of Tribal Affairs, Ministry of Food Processing Industries and NSTFDC for their work on this initiative. He also spoke about how the TRIFOOD project in Chhattisgarh and Maharashtra is an attempt to offer a comprehensive development package for tribals by promoting, employment, incomes and entrepreneurship.

The ‘Mechanism for Marketing of Minor Forest Produce (MFP) through Minimum Support Price (MSP) & Development of Value Chain for MFP’ Scheme, in particular,hasalready emerged as a beacon of change in these unprecedented times and has positively impacted the tribal ecosystem as never before. Implemented by TRIFED in association with State Government Agencies across 21 states of the country, the scheme has injected more than Rs 3000 crores directly in the tribal economy so far. Aided by the Government push in May 2020 wherein the prices of Minor Forest Produce (MFPs) were increased by upto 90% and the inclusion of 23 new items in the MFP list, this flagshipscheme of the Ministry of Tribal Affairs, which draws its strength from The Forest Rights Act of 2005,aims to provide remunerative and fair prices to tribal gatherers of forest produces.

The Van Dhan Vikas Kendras/ tribal start-ups, also a component of the same scheme, further complements MSP beautifully as it has emerged as a source of employment generation for tribal gatherers and forest dwellers and the home-bound tribal artisans. 1205 Tribal Enterprises spread across 18500 SHGs have been established to provide employment opportunities to 3.6 lakh tribal gatherers and 18000 Self-help groups in 22 States. The crux of the programme is that it ensures that the proceeds from the sales of these value-added products go to the tribals directly.

The TRIFOOD project aims to converge both the components in its desired merits. In association with MoFPI, the units that will be set up under the Scheme for Creation of Backward and Forward Linkages under the Pradhan Mantri KisanSampada Yojana, will procure the raw material from the Van DhanKendras in the state. The fully processed products will be sold across the country in Tribes India outlets, and franchisee stores. Moreover, TRIFED plans to identify and train tribal entrepreneurs who can also sell the products.

With systems and processes being put in place to make the procurement of MFPs and their processing and value addition a round-the-year process, TRIFED is working towards the successful implementation of the TRIFOOD project and other upcoming ones, so that tribal lives and livelihoods can be transformed and incomes secure.