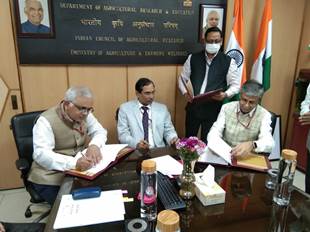 Tripartite MoU signed between Ministry of Ayush, CSIR, and ICAR for collaboration in areas of common interest

New Delhi: Ministry of Ayush has signed a tripartite Memorandum of Understanding with Council of Scientific & Industrial Research (CSIR), and Indian Council of Agricultural Research (ICAR) for Inter-Ministerial co-operation for the promotion and facilitation of research and development, validation, and deployment of agri-technologies related to medicinal plants and their value-added products of benefit to humans, plants and animals.

Previously, the Parties had bilateral cooperation with each other. The national aspirations related to Atmanirbhar Bharat draws necessity for multi-party stakeholder cooperation to achieve the defined goals. India with its vast history of rich culture and traditions has been endowed with valuable scientific heritage in the fields of health, wellness, agriculture, and food among many others. This rich heritage holds relevance not only in contemporary times but would address futuristic needs as well, by way of cooptation and integration with modern science and technology.

The key objective of the tripartite MoU signed today by the Ministry of Ayush, ICAR and CSIR is to draw cognizance to the traditional agricultural practices of India, and take up joint R&D pursuits for validating and deploying these interventions for facilitating socio-economic growth in the country.

On this occasion, Vaidya Rajesh Kotecha, Secretary, Ministry of Ayush drew attention to valuable traditional knowledge in the form of Vrikshayurved, Mrigayurved, etc., stating that the cooperation will be instrumental in validating these traditional sciences and practices towards integrative agriculture for the benefit of not only humans, but also plants and animals. He also touched upon the Ayurved Aahar initiative of the Ministry of Ayush and International Year of Millets in 2023, and the potential of the three Parties to contribute to the cause and promote healthy food habits based on traditional diets of India

Speaking on the occasion, Dr. Trilochan Mohapatra, Director General, ICAR and Secretary, DARE stated that the cooperation being signed by ICAR, Ayush and CSIR is a historical milestone towards reaffirming the mandates of the three organizations to the national goals on food & agriculture. The effort will focus on specific joint activities by the three Parties in the said areas to make a significant impact to the lives of Indians.

Dr. Shekhar C. Mande, DG, CSIR and Secretary, DSIR appreciated the organic linkages of CSIR with ICAR in the area of agriculture including horti-floriculture, and the Ministry of Ayush towards promoting traditional medicines, especially during the COVID-19 pandemic. He drew importance to the tripartite cooperation being brought during the day for linking the vastness of Indian traditional knowledge through modern S&T tools and the common goals of the Parties towards Atmanirbhar Bharat, especially towards ensuring food security and enhancing the livelihoods of the farmers.

The Secretaries proposed to form a Joint Working Group involving officers from the Ministry of Ayush, ICAR, and CSIR for effective implementation of the MoU. This JWG will meet at least twice in a year to follow up the execution of this MoU and suggest necessary measures for its development.

University of Michigan: Model predicts how nanoparticles interact with proteins

iednewsdesk May 18, 2022
With antibiotic-resistant infections on the rise and a continually morphing pandemic virus, it’s easy to see why…