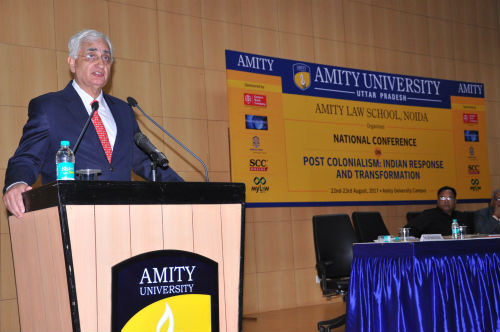 #TripleTalaq is not an acceptable form of behavior between a man and a woman” avers Mr. Salman Khurshid

New Delhi: Congratulating Amity on holding such a topical conference and sharing his views on the far reaching Judgment regarding “Triple Talaq” which is being celebrated in the country, Mr. Salman Khurshid -Politician (Indian National Congress and designated Sr. Advocate said that all the 5 Judges deciding the case, more or less, accepted that “Triple Talaq is not an acceptable form of behavior between a man and a woman”. The top five Judges of our country came to different conclusions in the Case and highlighting the probable causes behind diverse conclusions, Mr. Salman Khurshid stated that some may say that the “minds of the Judges are designed or programmed in post-colonial India, constrained by colonial education. Some may say that this is the way human beings differ; every mind responds differently because of different experience, education, DNA, family, cultural background. Somebody may say it is acceptable and somebody may say it is unacceptable. Why do people differ and how do people differ is an interesting topic. “It is rather a self destructive way to say everything which is negative should be put at the door of colonialism in our country.” remarked Mr. Khurshid.

The Conference aimed at tracing India’s specific responses to colonialism and analyzing the postcolonial understanding of the same. It focused on tracing the socio- political intricacies of contemporary Indian times and identifying the indigenous legal patterns and traits of society.

The sub-themes of the Conference included “Postcolonialism: Perspectives from History and Literature”, “Postcolonial Socio-Political Responses​”, “The Post-Colonial Legality in India​” and “Indian Economic Transformation”.

Addressing the gathering, Prof. (Dr.) Shefali Raizada, Addl Director, Amity Law School Noida said that conference was unique because of its inter disciplinary nature which would have widen the horizon of the students. She further added that events like this provide opportunity to students to learn new trends, interact with other students from various colleges and learn team work and dedication. She stressed that such events facilitate out of the class learning which is the need of the hour.

Briefing about the conference, (Dr.) Aditya Tomer, Addl. Director, Amity Law School, Noida said that the conference was spread into six technical session on various sub themes from History, Economy, Law and more than 80 research papers were presented by Scholars which added brilliance to the conference.

Speaking on the occasion, Mr. Anil Bajpai- Member of Legislative Assembly, Delhi said that advocates like Mahatma Gandhi Ji, Pandit Jawahar Lal Nerhru Ji have contributed a lot in the freedom of the country. He mentioned that India is a free nation today but still we are fighting for real freedom. He stressed that partition has done a lot of damage to the country and it is the responsibility of the youth to help in mending the differences. He averred that over the years, India has been successful in becoming a developing country and called upon the budding lawyers to sustain the growth. He opined that India, irrespective of all disruptions, is one in spirit.

Dr. Aman Hingorani, Senior Partner at Hingorani & Associates said that the conference has interesting topics of interdisciplinary nature. He shared that modern India and Pakistan is created by British statutes. British decided to partition India and as a result, artificial boundaries were created. Dr. Hingorani pointed out that partition cannot be undone since the citizens of both the nations have been brought up on hatred. It is important to understand the reason behind the partition which was due to British officials who sharpened the differences between Hindu and Muslim communities and as a result, only Britsh were considered as the composers of the situation. He opined that it should be a matter of discourse in academic institutions that if we cannot redraw the borders but they can certainly be made irrelevant.

Sharing his views, Mr. Baldev Bhai Sharma, Chairman, National Book Trust lauded Amity Law School Noida for organizing a conference on topical issue which needs to be discussed amongst the youth. He emphasized that students are the future of our country and they need to think about the growth and development of the nation. Every Indian should respect the country as it is not just a piece of land but a cultivation of knowledge and agriculture. Mr Sharma averred that knowledge without values is of no use and a person cannot succeed in life without imbibing both. He apprised that India witnessed progressiveness before colonization and after colonization as during colonization we were stagnant. He called upon the students to work towards the betterment of humanity and advised them to think about others and respect their feelings.

During the occasion, “Amity International Journal of Legal & Multidisciplinary Studies” and “Media Law Book on: Laws Governing Media and Entertainment Industry” were released by the dignitaries

National Sports Museum to be established in New Delhi