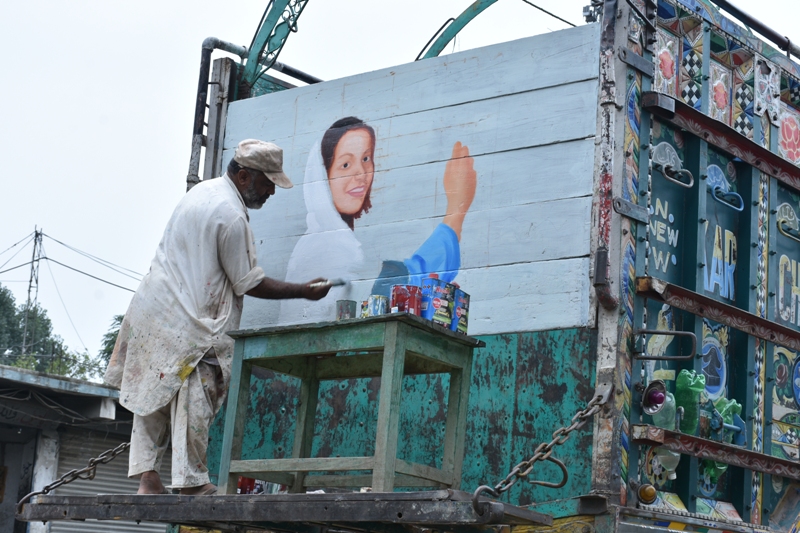 Truck Art – An Instrument of Advocacy

Pakistani “truck art” has become a global phenomenon, inspiring gallery exhibitions abroad and prompting art and craft vendors to sell flamboyant miniature pieces. For the truck drivers, the designs that turn decades-old vehicles into moving murals are often about local pride. Picking the right color or animal portrait is tougher than the countless hours spent on the road. One of the truck artist in Rawalpindi said, “The people of Malakand, South Waziristan and Kashmir region like portraits of mountains and different wild animals like eagle and lion and they are in a big demand”.

UNESCO has been using this unique art blended with indigenous motifs to communicate messages on girls’ education in Kohistan district in Khyber Pakhtunkhwa. The approach, adopted under the UNESCO’s Girls Right to Education Programme, has been overwhelmingly welcomed by the local community, including the religious leaders and ulema. Over twenty trucks forwarding goods and timber along the Karakorum and Indus highways are painted with colorful portraits and murals advocating for girls education. For this purpose, different inspirational quotes like ‘Ilm taaqat hai’ (Education is power) and ‘Ilm roshni hai’ (Education is light) were used. This was the first time that images of school going girls with advocacy messages were used that were empowering yet culturally sensitive and widely accepted by the local communities.

FAO and Wageningen University and Research in the…

Several bridges were identified and painted with the traditional mosaic work carrying advocacy messages on girls’ education. The first bridge in Dubair was painted to gauge the reaction of the local community. Before moving to the next bridge in Besham, local community members were interviewed for feedback. The artist was trained how to incorporate local community members suggestions and feedback in the painting process. In Dubair, the local mosque Imam asked for his mosques name to be added as an advertisement on the bridge. The artist painted it in a corner so that the local community take responsibility and ownership of the work. Similarly, the local police and political party showed interest too.

Usually, the classrooms for primary section are painted with images of cartoons from Disney. UNESCO took a different approach and used the traditional truck art to paint class room walls. In areas like Pattan where the schools were painted, local images and symbols were used that were colorful and relatable. The walls were brightly painted with Urdu alphabets and symbols that were more indigenous. For example, Baab-e-Khyber, Sandooq, Ghulail etc are all known to the local children and therefore, easy to learn. Some of the images such as ‘Kulhaari’ were replaced with ‘kitaab’ as kulhaari at times is used as a weapon too.

The approach helps in preserving the local art developed by rural women and truck artists with the engagement of local school children. They will have access to an indigenous form of local art through organized activities. Not only will the methodology help in passing on the local craft to the future generations but also help in amplifying important messages on educating girls to the general community while preserve local art simultaneously.