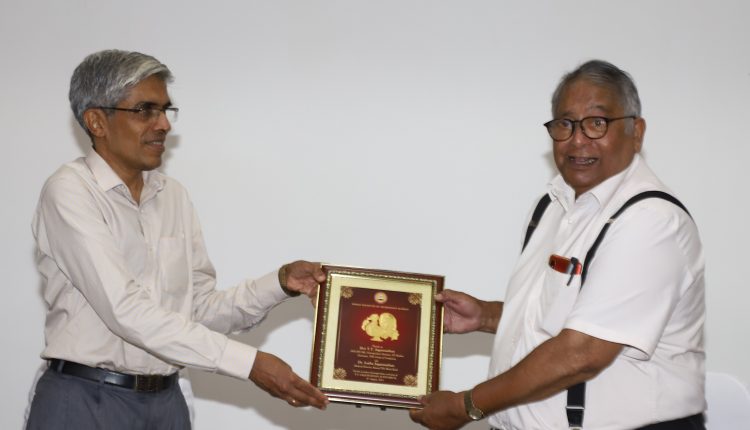 - Endowment to be used to further the pursuit of research at the institute - IIT Madras inaugurates ‘T.T Jagannathan Auditorium’

Chennai: Mr. T.T Jagannathan, Chairman of TTK Prestige, contributed INR 10 Crore to IIT Madras to establish an endowment, which will be used for further research. The interest from the endowment will be used to support new research pursuits by IIT Madras students and faculty.

As a distinguished alumnus of IIT Madras, Mr. Jagannathan was part of the 1970 batch of students. He was awarded the Gold medal from IIT Madras for best academic performance in Mechanical Engineering.

He subsequently went on to turn the fortunes of his family business the TTK Group, and is credited with the phenomenal rise of the TTK Prestige brand in India. In recognition of his achievements and to commemorate his contributions to the business world, IIT Madras announced that an auditorium is being named after Mr. Jagannathan.

The auditorium was inaugurated today (6th August 2021) by Mr. T.T. Jagannathan in the presence of Prof. Bhaskar Ramamurthi, Director, IIT Madras. The ICSR Auditorium is all set to become the hub for the nodal activities of IIT Madras.

Commenting on the occasion, Mr. Jagannathan, Chairman of TTK Prestige said, ‘I have the highest regard for my alma mater, where I enjoyed many rewarding years. IIT Madras has established a reputation of being a hub of research and innovation. I am delighted to contribute in a small way to help IIT Madras to further its pursuit of research. My donation is a small way to repay IITM for all that it has given me. I would like to extend my gratitude to the institute for bestowing me with the honour of naming an auditorium after me. I feel humbled and grateful.’’

Speaking on the occasion, Prof. Bhaskar Ramamurthi, Director, IIT Madras, said, “Our Distinguished Alumnus and Pioneer of Indian Industry Mr. T.T Jagannathan has been a very generous supporter of his Alma Mater. We are honoured that our Auditorium will be carrying his name. He is a role model for our students and budding entrepreneurs.”

Speaking on ‘TTK Group in the realm of service to all stratum of the society,’ Ms. Shanthi Ranganathan, Founder, T.T. Ranganathan Clinical Research Foundation, said, “The family has the tradition of contributing towards the welfare of the community in the areas of health and education long before CSR came into being.”

In 1996, Mr. Jagannathan won the ‘Distinguished Alumnus Award’. He is fondly called the ‘Kitchen Mogul’ for his grand success of TTK Prestige cookware and his US patent on the TTK Microwave pressure cooker. Under his leadership, the TTK Group is active in several social and educational fields.

The TTK Group is an Indian business conglomerate with a presence across several segments of the industry including kitchen appliances, consumer durables, pharmaceuticals and supplements, bio-medical devices, and healthcare services.