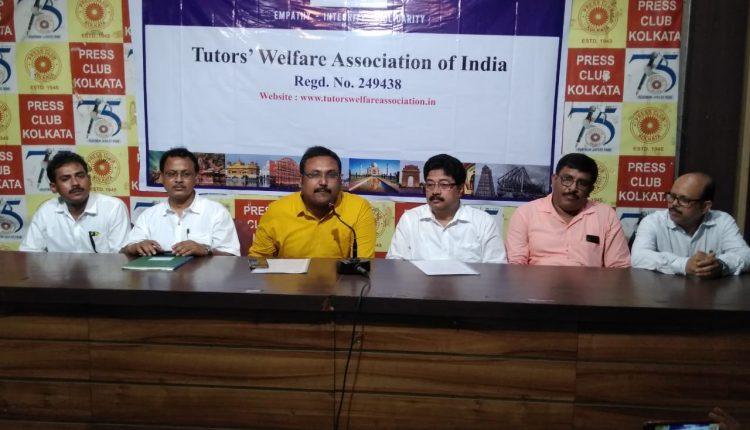 The Association, registered on 10th November 2021, was formed as one of the apex bodies or umbrella organization to not only address and protect the needs and concerns of the tutor fraternity across India but also to articulate their demands and grievances in various fora.

“The unsung tutors’ contribution in building the nation must be appreciated by the government for the betterment of the society and eradicate corruption embedded in the education system,” says Swapan Datta (Ujjwal), President, TWAI.

The tutors, while earning their livelihood, play a vital role in building the society. They, however, are a neglected lot and remain outside the Government welfare schemes.

During the Covid pandemic all the educational institutions remain closed. The online classes were confined to the urban and semi-urban areas only and did not include a vast section of students in the rural areas. Most of the students had no smart phones and the tutors, cutting across various faculties, remained in contact with the students and helped them to continue their studies while complying with the Covid hygiene protocols. The tutors, in the face of huge financial crisis, carried out their duties with meagre or no remuneration considering the socio-economic condition of the parents of students.

Some tutors, related to dance and other performing arts, could not arrange online classes despite being based out of cities due to Covid.

C.Before the formation of TWAI, the members of the Association have submitted deputations against such practices to the Head Masters of schools, president of managing committees, various councillors, chairman of municipalities, block president, Block Development Officers, District Magistrates, DI of Schools, the president of West Bengal Council of Higher Secondary Education, the president of West Bengal Board of Secondary Education, the director of School Education (7th floor of Bikash Nhavan), NCPCR, WBCPCR and also the then education minister honourable Mr Partho Chatterjee. But our effort has yielded no results so far, hence we demand a proper investigation in this matter.

iednewsdesk May 12, 2022
The École Polytechnique campus is hosting the Paris-Saclay Spring 2022, the 5th edition of the annual event…