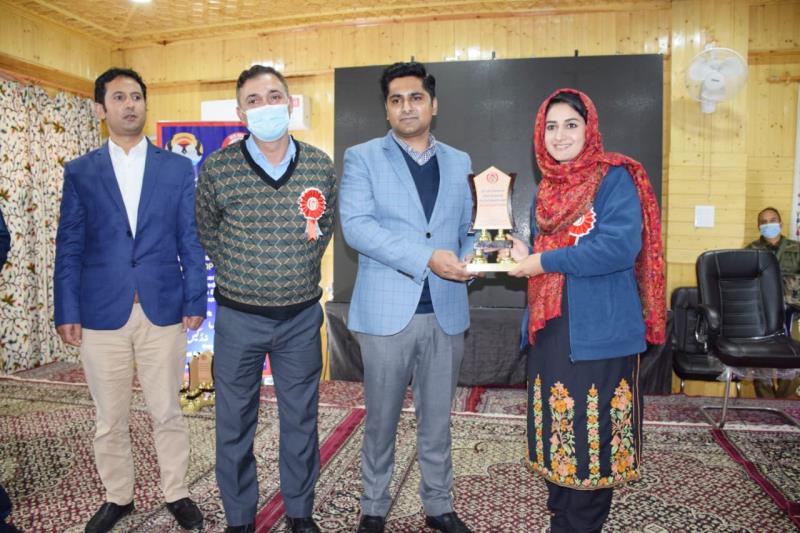 The main attraction of the day was Captain Sami Ara-the first lady pilot from Kashmir who started her journey from a village of Sumbal Bandipora and ended up flying commercial airplanes. She shared her experience and the journey from Sumbal to Texas (USA) where she learned to fly.

While speaking to an enthusiastic gathering of girls, she said the journey from a Sumbal village of Bandipora district to Texas was not an easy one but a herculean task especially for a girl living in a conservative society. She said she fought all odds with courage and made her place in the cockpit.

She urged the girls to strive hard to achieve their goals and then no power on earth can stop them from achieving their goals. She appreciated the efforts of the district administration for organizing the career counseling for girl students at the very opportune time and hoped that more such programmes are held for each and every student at Higher Secondary level so that they are able to make better career choices at the initial stage of their lives.

On the occasion the district administration presented a research journal “Parvaaz 2020” published by Mahila Shakti Kendra Bandipora that has a “cover story” about the success of Captain Sami Ara.

Deputy Commissioner Bandipora Dr Owais Ahmad attended the concluding session and said that the conclave was aimed at inspiring the female students and helping them in choosing better career options. He said sharing the success stories of successful women in different fields inspire the younger generation to strive hard to achieve their goals.

He said that the district administration is providing every possible support to the girls in different fields including education, career counseling, skill development and hand-holding for making girls self-reliant and empowered.

He impressed upon the students to take advantage of the counseling sessions and make the right decisions at the right time to be able to compete at the national and international level.

The DC said said that keeping in view the enthusiastic response of the students, the district administration has decided to replicate similar Career Counseling events at High Secondary Schools at sub-divisional level as well. He said a career counseling cell has been constituted in all the Higher Secondary Schools and the administration is planning to incorporate it as a regular event in schools/colleges of Bandipora.

Dr Owais said several measures have been taken during the last one year under Beti Bachav Beti Padhav campaign to empower the women folk. He said Mahila Shakti Kendra is fully functional and provides awareness to women about all government schemes.

He said out of the 81 indicators of Panchayat Development Index (PDI), there are 35 outcome indicators on women being monitored monthly aimed at monitoring the condition of women folk at grass roots level.

Dr Owais said several seminars, workshops on Women Empowerment, inheritance Rights of Women Rights and harassment at workplace have been organized under BBBP program while a grant-in-aid of Rs 10,000 each to more than 20 girls for hygiene and other requirements of girl students.

He said mothers of Girl Child are regularly felicitated by providing Baby Kits and Birth Certificates at doorstep to make them feel special and celebrate the birth of a girl child. He said fellowships have also been provided to the girl students for various competitive exams besides celebrating BBBP Week at Panchayat Level with Special focus on Girl Dropouts and other issues and the efforts have been appreciated by the Ministry of Women and Child Development, Govt of India.

Earlier during the technical sessions of the conclave on Day –II , Dr Sabeha, Ishrat Ayoub and Farah Zaidee spoke about Gender based Violence and Mental Health with special reference to “Counseling a career” while Amira Wali and Aisha Shafi debated about Social Work as a career and Shayesta Nazir, Dr Aneeda Jan and Arifa Jan discussed about Law as a Career.