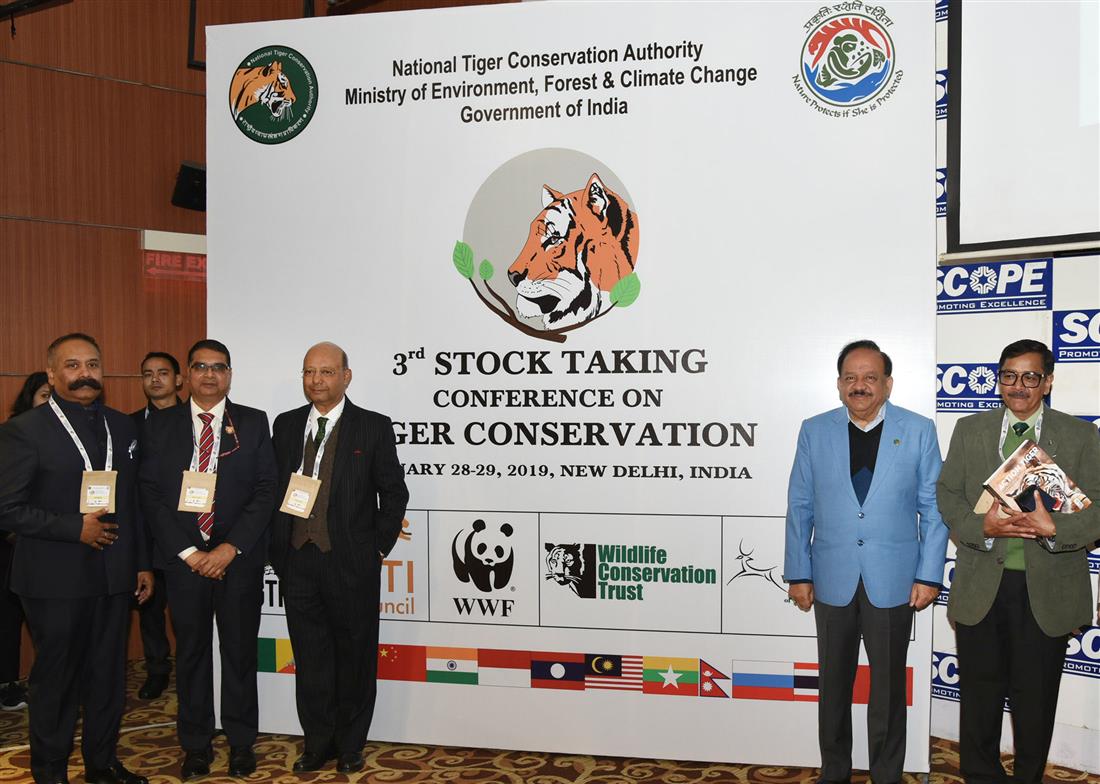 New Delhi: The 3rd Stock Taking Conference on Tiger Conservation was inaugurated in New Delhi today. Third in a series of Stock Taking Conferences, this is the second to be held in India after 2012 and is expected to have wide ranging discussions on the status of the Global Tiger Recovery Program (GTRP) by the 13 tiger range countries besides deliberations on combating wildlife trafficking.

Union Minister for Environment, Forest and Climate Change, Dr. Harsh Vardhan, who is also the Chairman of the National Tiger Conservation Authority said on the inauguration that conservation of tigers is a duty which has to be meticulously pursued and more innovative ways needs to be devised so that we can better the targets adopted by tiger range countries in 2010 at St. Petersburg, Russia. “The New India that we envisage is not only for humans but for every aspect including wildlife”, said Dr. Vardhan.

During the St. Petersburg declaration in 2010, tiger range countries had resolved to double tiger numbers across their range by 2022. At the time of deliberations at St. Petersburg, India’s tiger estimate stood at 1411, which after the third cycle of the All India Tiger Estimation, 2014 has nearly been doubled to 2226. This has largely been possible because of strides made against Key Performance Indicators (KPIs), predominant among them being legislation to ensure protection of tiger habitat and enhancement of penalties, besides providing a statutory basis for inviolate space. The fourth cycle of the All India Tiger Estimation, 2018 is currently under way.

This is the second stock taking conference to be held in India after 2012, wherein progress against resolution adopted by tiger range countries in 2010 at St. Petersburg, Russia, is measured against Key Performance Indicators (KPIs) as decided by the said countries. Global and National Tiger Recovery Programs (GTRP/NTRP) were formulated by respective tiger range countries as a consequence of this historic decision.

A major outcome of the Conference is expected to be course correction in strategies envisaged in GTRP/NTRPs which shall take tiger conservation forward to the intended goal as outlined in St. Petersburg.

The conference is being hosted by the National Tiger Conservation Authority, Ministry of Environment, Forest and Climate Change in close collaboration with the Global Tiger Forum which is an International, Intergovernmental Organization for conserving tigers in the world.

Participation in PISA will improve learning levels of children and enhance quality of education in the country: Prakash Javadekar