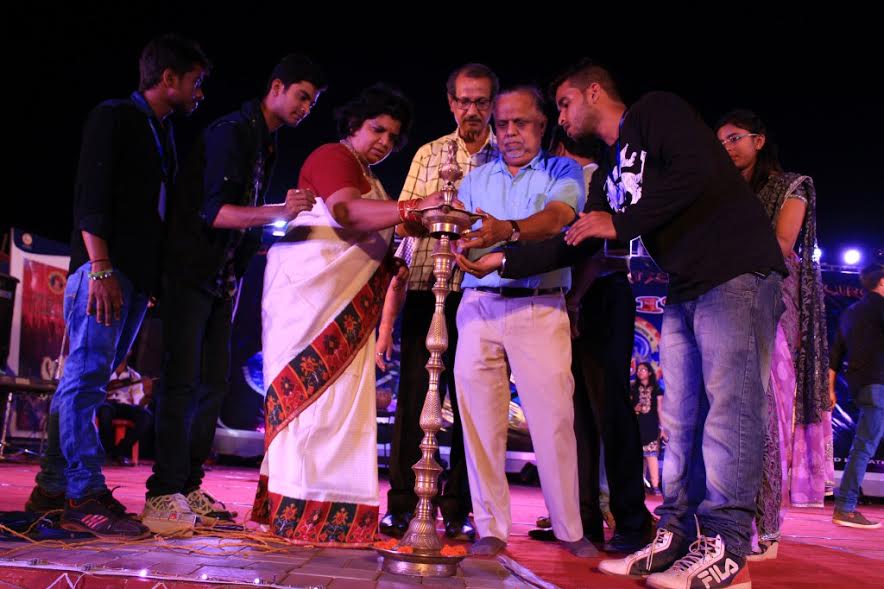 By India Education Diary Bureau Admin Last updated Apr 23, 2020
Share
Bhubaneswar: Participation by over 5,000 students from across 50 colleges from across the state. Gajajyoti is one of Odisha’s biggest Techno – Management – Cultural – Sports fest. The sheer diversity such as theater, literary, fine arts, quizzing, fashion, photography, technical and sports sufficient proof of this.
Bhubaneswar, March 2, 2017 – The fun fiesta, Gajajyoti 2K17, the sixth Annual Techno – Management – Cultural – Sports Fest organized by Centurion University on 1st and 2nd of March, turned out to be a grand success. The participants, students, faculty and management who were part of the events at Gajajyoti 2K17, enjoyed the show and cheered. More than 5,000 students from across 50 colleges from all over the state were present at Gajajyoti 2K17 and around 2500 of them took part in various events in Gajajyoti 2K17 this year. Few of the universities and colleges who participated in the fest included AIMS, NISER, SRI SRI UNIVERSITY, XAVIER UNIVERSITY, SOA UNIVERSITY, KIIT and UTKAL UNIVERSITY.
The first Day of Gajajyoti 2K17 (Art, Craft & Photography exhibition and Xplora-2K17) was inaugurated by Prof. Jagannath Padhi Director, CUTM-Jatni Campus of the centurion university in the presence of faculty and Senior Management. The extravagant inaugural event was followed by flagging off various events starting with-
Xplora: Techno-Management event series including Manual Robotics, Autonomous Robotics, Robowar, Robo Race, Robo Soccer, Aero modeling, Water Rocket, Android, Auto CAD, IOT, Circuit Design, NFS, CS, C Coding, Paper Presentation, Structure Design, Informal, Ad-Mad Show, B-Quiz, Market Khetra, Eagle eye, Treasure hunt, Best out of Waste & many more.
Satajyotee: A buzzing musical night, saw raving performances.
Related Posts

Apr 7, 2022
The show concluded on a grand note, where everybody danced, sang and partied in the Starry Night which was held immediately after the high-energy Fashion show that was held in the evening. The dance floor was thrown open to everybody once the results of the various events were announced and the winners were felicitated with exciting prizes.
Prof. Haribandhu Panda, Vice Chancellor, Centurion University, was immensely proud of the efforts put into the event, the turnout at the venue and the overall success of the show. Participants from colleges across Odisha remarked on the high quality of the fest and called it as one of the best organized fests in the State today. The participants recalled how much Gajajyoti means to them.
As much as the Star Night pumped up energy to conclude Gajajyoti 2K17 on a high note, the organizing committee and students felt nostalgic as they bid farewell to another Awesome Gajajyoti! They however had a bright gleam in their eyes as they look forward to Gajajyoti 2K18 – Bigger. Better. Brighter than this year!
Share FacebookTwitterGoogle+ReddItWhatsAppPinterestEmail