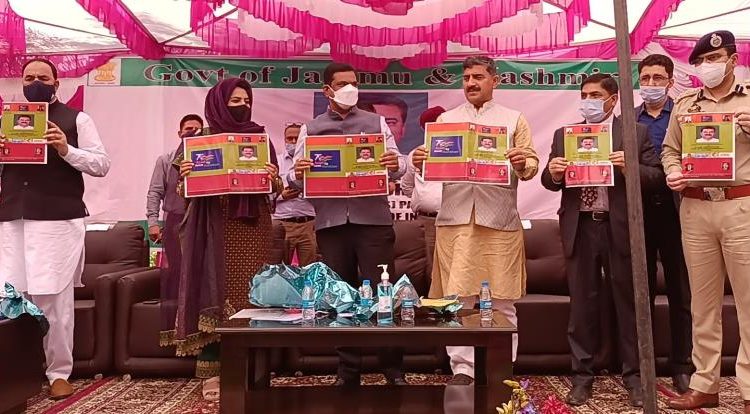 POONCH : Union Minister of State for Panchayati Raj, Shri Kapil Moheshwar Patil met with several public delegations including Jammu & Kashmir NPS Employees United Front district Poonch today. On the occasion numerous public issues were brought to the notice of the Minister. The Minister assured the deputations that he will submit the charter of demands with his recommendations to UT administration for early redressal. Later, Sh. Patil inspected various stalls organized by district administration.

While presiding a mega public function here at Dak Bunglow Poonch, the MoS said that the Prime Minister of India is very concerned about overall welfare of Jammu and Kashmir. He added that J&K has special place in the heart of PM and he is very keen to pace up development tempo of the UT for which the centre has a separate blue print.

“Union Government is making best of efforts to ensure that benefits of center government programs reach to all sections of the society without any discrimination and also in making the delivery system of welfare programs more effective with accountability and transparency in the administrative setup,” the Minister said.

The Minister said that there is no dearth of employment opportunities in the Government and other sectors but the youth should be focused and able to grab the job opportunities available in different programs and schemes of the Central Government. He said this while quoting example of a women self help group Khawaja-Greeb Nawaz from tehsil Mandi area working under NRLM which is not only creating employment opportunity for themselves but also creating employment avenues for other unemployed youth of the areas. He advised the youth to work hard to achieve their desired goals in life.

In his address to PRIs, Sh Patil said that for the first time in the history of Jammu &Kashmir three tier Panchyati Raj institution has been set up and J&K is moving forward on the path of integrated and equitable development. He announced to release Rs 25 lakh for the construction of Panchayat Bhawan and Rs 5 lakh for repair.

The Minister added that the Central Government is very much serious about the devolution of more powers to this institution to flourish further and in this regard, concrete steps are being taken to further strengthen the democracy at the grass-root level and numerous initiatives are being taken into consideration to bring transformation in every sector to help the UT administration to march towards golden future.

While talking about improvement in health infrastructure in rural areas and water scarcity, the Minister said that liberal funding under 15 FC has been made to Jal Shakti department and Swasth Vibag but the need of the time is to utilize the available resources for the betterment of the general public.

The MoS also inaugurated Tourist Reception Centre at Mandi at Budha Amarnath Mandir which will facilitate the tourists and pilgrims visiting Holy Shrine and other places of tourist attractions in Poonch. He also inaugurated a Panchayat Ghar at Lower Loran-(B) and laid foundation stone of a road at Chakrara which will facilitate good connectivity for the nearby areas for the local people.