Stanford students Cole McFaul and Caroline Zhang, who are both pursuing master’s degrees as co-term students, have been named 2021 Yenching Scholars and will receive full scholarships for graduate studies at Yenching Academy of Peking University. 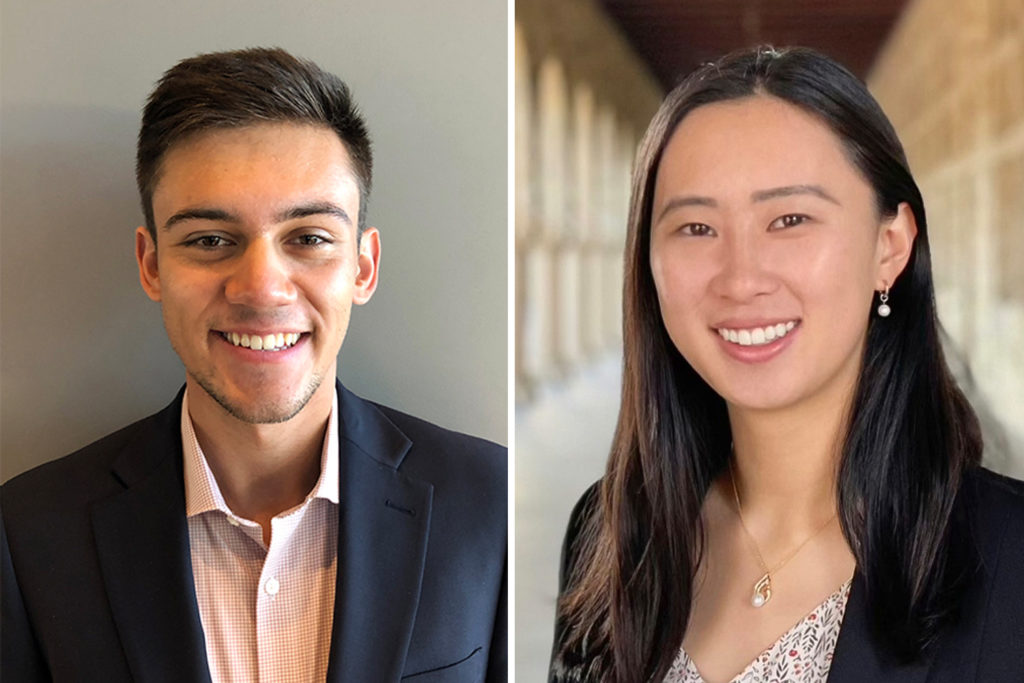 They are among the 114 students chosen from 37 countries and regions for the program, which offers a one-year master’s degree in Chinese studies.

Through coursework, independent research and field studies, Yenching Scholars examine China’s past, present and future, with particular emphasis on its development and role in the world. Working closely with academic mentors, they create their own study programs, choosing from six academic concentrations and a variety of extracurricular activities.

Cole McFaul earned a bachelor’s degree in political science at Stanford in 2020 and is pursuing a master’s degree in East Asian studies in the School of Humanities and Sciences. At Yenching Academy, he plans to focus on politics and international relations and improve his Chinese language abilities. By the end of the program, he hopes to be more comfortable reading Chinese texts and speaking in Chinese about economic and political issues.

“At Stanford and especially as a co-term student in East Asian Studies, I have spent a lot of time trying to understand Chinese history, politics, economics and culture in the classroom,” he said. “In Beijing, where I will be immersed in the country’s language and culture, I will be given the chance to apply what I have learned at Stanford and to deepen my own understanding of the country in a more hands-on setting.”

Eventually, McFaul said, he hopes to contribute to improving relations between the United States and China, either through research or policymaking.

Zhang’s planned course of study at Yenching Academy will include a concentration in economics and management.

As a Yenching Scholar, Zhang hopes to conduct research on how private sector players are integrated into Chinese smart city development and to explore comparative approaches to data protection across the United States and China.

“Eventually, I would like to pursue a career helping innovate or fund technology improvements across borders,” she said. “I want to be a voice in the conversation championing global collaboration and prosperity.”