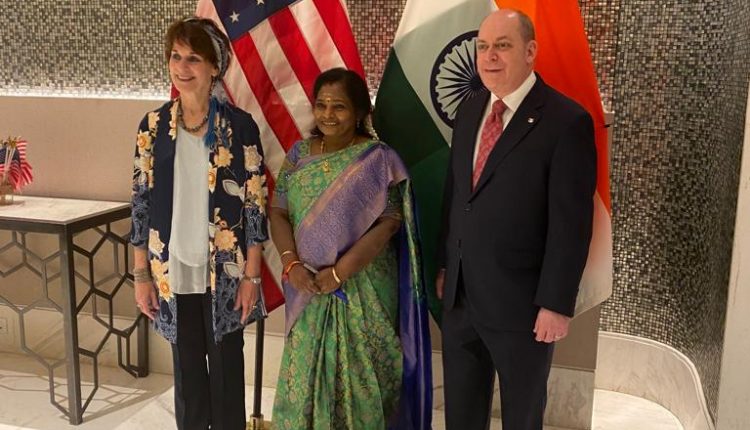 “It’s an honor to be in Hyderabad to celebrate U.S. Independence Day and mark the 75th anniversary of U.S.-India relations,” said Chargé Lacina.  “Telangana, Andhra Pradesh, and Odisha play a key role in the story of the U.S.-India partnership.  I am proud to be a part of that story with you.”

In addition to her attendance at the U.S. Independence Day Gala, Chargé Lacina visited the International Crops Research Institute for Semi-Arid Tropics on June 2, which receives support from the U.S. Agency for International Development (USAID).  She also held a dinner with women leaders at the Taj Falaknuma.  On June 3, she traveled to the Mitr Clinic, India’s first comprehensive clinic for the transgender community, which is also supported by USAID.  Prior to participating in the U.S. Independence Day event, she visited the construction site of the new U.S. Consulate General facility in Nanakaramguda.

“Our new consulate is a down payment on future U.S.-India relations.” said U.S. Consul General Joel Reifman, who will leave his post and return to the United States in mid-June.  “Although I’m shocked at how quickly my time has passed in Hyderabad, I will leave knowing that we will continue our work together as Americans, Indians, and friends.”

The U.S. Independence Day Gala included speeches from Chargé Lacina, Consul General Reifman, and Governor Soundararajan.  It also featured performances of the U.S. and Indian national anthems, as well as a video previewing the features of the new U.S. Consulate General building.

“Telangana is the youngest state in India and our relationship with U.S. companies, organizations, and people is a great strength,” said Telangana State Governor Tamilisai Soundararajan. “The presence of the U.S. Consulate is a vote of confidence in Hyderabad, and we are confident that U.S.-India ties are only going to deepen in Telangana.”