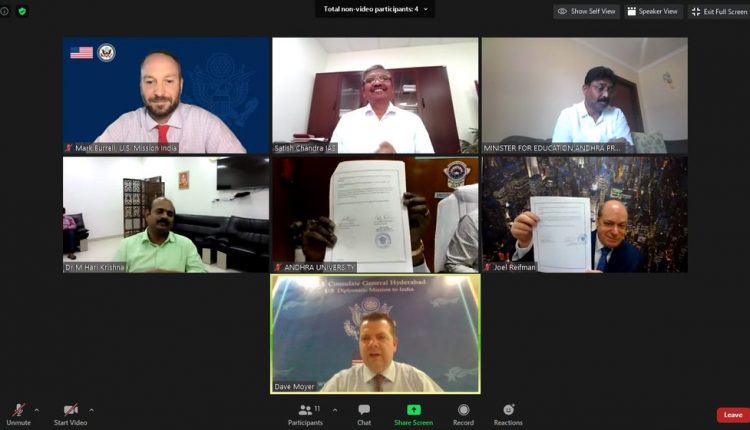 Visakhapatnam: The U.S. Consulate General Hyderabad and Andhra University signed a Memorandum of Understanding (MoU) to establish an American Corner at its campus in Visakhapatnam. Consul General Joel Reifman from the U.S. Consulate General Hyderabad, Andhra Pradesh Minister of Education Dr. Adimulapu Suresh, and Andhra University Vice-Chancellor Prasad Reddy were present during the event. Mr. Reifman and Mr. Reddy virtually signed the MoU, which governs the establishment and functioning of the American Corner.

In addition to four U.S. government-owned American Centers in India, this is the third American Corner in India and the second in Hyderabad’s consular district, which covers the states of Andhra Pradesh, Telangana, and Odisha. American Corners are partnerships between the U.S. Embassy or Consulate and an Indian institution. The new American Corner, which will open in summer 2021, will provide educational and cultural programs for the people of Andhra Pradesh, especially young people. It will also provide access to materials and conversations on aspects of life and culture in the United States. It is intended to be the first place to visit for accurate and up-to-date information about political, economic, cultural, educational, and social trends in the United States.  It will also be a space for dynamic conversations on wide range of topics of interest to the local community.

The United States Government and the Andhra Pradesh Government share several top priorities. Both governments are committed to providing young people, particularly women and those from underserved communities, with increased educational and economic opportunities. Through the American Corner and its programs, local youth can improve their communication and leadership skills.

Speaking at the event, Consul General Reifman said, “American Corner programming will focus on English language learning, STEM education, women’s empowerment, American culture, and U.S. higher education.” The Consul General thanked the Andhra Pradesh Government for its support and said, “We hope that this will be a fun and energetic meeting place where our two cultures and countries can blend together, and where we will welcome youth and people from underserved communities to learn more about the United States.”

Minister Suresh said, “I am very pleased to have witnessed the United States Consulate General Hyderabad and Andhra University sign a Memorandum of Understanding to jointly establish an American Corner at Andhra University in Visakhapatnam.” He added, “This will act as an academic and cultural space that will organize programs to help our students, young people, and realize the vision of our Chief Minister. The American Corner will contribute to strengthening the relationship between Andhra Pradesh and the United States.”

‘Workers and Robots’: U of T researcher focuses…

U of T joins Canadian universities and colleges in signing…

American Spaces in India, which include American Centers and American Corners, run over 1,000 physical and virtual events each year that expand the connections and understanding between the United States and India. Hosted in embassies, schools, libraries, and other partner institutions worldwide, American Spaces are platforms for providing information and engagement through activities, such as:

Educational advising for those who want to study in the United States,

Workshops on a range of topics from career skills to English language learning,

University of Groningen: Symposium: ‘Reinventing Chemistry Together’ with Ben Feringa and others

‘Workers and Robots’: U of T researcher focuses on Amazon’s…