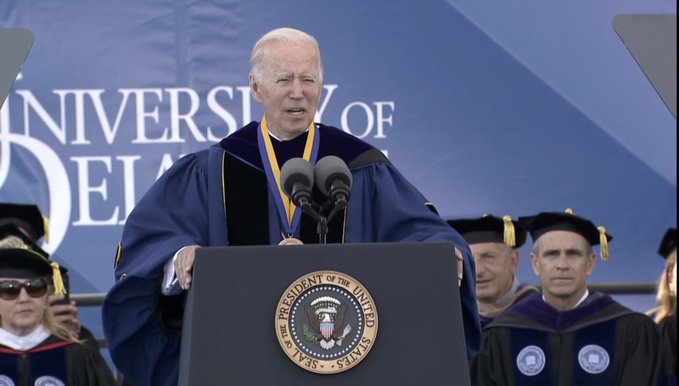 Delaware: U.S. President Joe Biden addresses 6,000 graduates at his alma mater, the University of Delaware. Says, “This is no time to be on the sidelines. We need all of you to get engaged in public life and the life of this nation.” And,“democracy is a human enterprise.”

“The entire University of Delaware community is truly honored to welcome President Biden as our distinguished guest — and the first sitting U.S. president to deliver a Commencement address at UD — to celebrate the excellence and achievement of the Class of 2022,” Assanis said. “His commitment to a lifetime of public service is an inspiring example for our graduates, as well as all our students and alumni, of what they can accomplish with a UD education, whatever path they may choose in life.”

The Commencement ceremony, scheduled for 9:30 a.m., May 28, in Delaware Stadium on the University’s Newark campus, is a ticketed event open only to graduating students and their guests. Some 4,000 graduates are expected to attend, with approximately 16,000 family and friends. The ceremony also will be livestreamed.

Biden has spoken at four previous UD graduation ceremonies throughout his career — in 1978, 1987, 2004 (when he received a honorary doctor of laws degree) and 2014.

The president and First Lady Jill Biden belong to a select group known as “Double Dels,” couples who are both UD alumni. He received his bachelor’s degree with a double major in history and political science in 1965, and she earned a bachelor’s degree in English in 1975 and her doctorate in education in 2006.

Over the years, Biden has maintained close ties with his alma mater and visited campus numerous times in both official and unofficial capacities.

On a 2018 visit to mark the establishment of the Joseph R. Biden, Jr. School of Public Policy and Administration, he said, “The University of Delaware holds a special place in my heart. It was here that I was inspired to commit to a life of public service. And it was here I had great professors who convinced me I could — who made me believe I could make a difference.”

In 2017, Biden became the founding director of UD’s Biden Institute, a research center that develops public policy solutions for some of the nation’s toughest domestic problems, including civil rights, environmental sustainability and violence against women. His sister, Valerie Biden Owens, who is also a UD alumna, now serves as chair of the Biden Institute.

A year earlier, Biden was on campus to attend the inauguration of Assanis as UD’s 28th president.

In 2011, Biden donated his Senatorial papers to the University of Delaware Library and delivered the inaugural James R. Soles Lecture on the Constitution and Citizenship, and in 2003 he visited the campus to participate in a special edition of MSNBC’s Hardball College Tour, where he took foreign policy questions from journalist Chris Matthews and from students.

In 1984, he was inducted into the University’s Alumni Wall of Fame.

University of Nottingham: New book uses extraordinary numbers in physics to explain the mysteries of the universe

University of Sheffield: Regulate whole life carbon in buildings to…

University of Auckland: Animals may be able to evolve faster than…