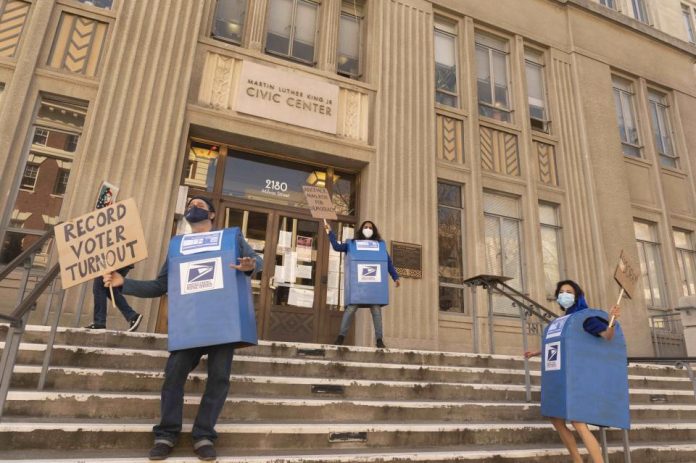 Of course, there will be speeches, Lady Gaga, Garth Brooks and others performing on Inauguration Day in Washington, D.C., on Wednesday. But a University of California, Davis, performance artist will be leading a troupe of dancing mailboxes in four other cities to celebrate the event.

DELIVERING DEMOCRACY is a project of Larry Bogad, chair of the UC Davis Department of Theatre and Dance, who had the idea during presidential election season when voting by mail became a subject of controversy. DELIVERING DEMOCRACY was created by Artistic Director/Producer Bogad (UC Davis/Center for Tactical Performance) and Theatrical Director Leese Walker of NYC’s Strike Anywhere Performance Ensemble.

“This was democracy in action. I thought, what if the mailboxes just started dancing — celebrating the hardworking civil servants of the post office … and really, just celebrating working people everywhere who make democracy possible,” Bogad said about the project, which is nonpartisan and only advocates voting and democracy, not one candidate over another. It was meant to be uplifting, but have a message too, he said.

Performers dressed as mailboxes — authentically blue contraptions that a team of individuals made of cardboard in Bogad’s Berkeley backyard — danced first in Pennsylvania, a swing state, moving to a reworked version of the pop tune “Please Mr. Postman” and handing out flyers with useful and accurate information about how and where to vote by mail, drop box or in person.

Later, after all ballots were counted, and Joe Biden won, Bogad said, the team decided, “why not just keep celebrating democracy on Inauguration Day?”

Inauguration Day dancing too
“I thought: 65 million people voted by mail, and their ballots were counted and verified. Hooray. Support democracy. … How about a victory lap for America.” — Bogad

The troupe is made up of about 15-20 people, including Bogad, divided up now into the four cities in which they are dancing on Wednesday. Bogad initiated and developed the flash-mob-style street show at his Center for Tactical Performance and the Strike Anywhere Performance Ensemble in New York City.

University of California, Los Angeles: With $12 million in federal funding, UCLA to expand reach of its depression treatment

University of Minnesota: U of M receives $3 million for interdisciplinary...