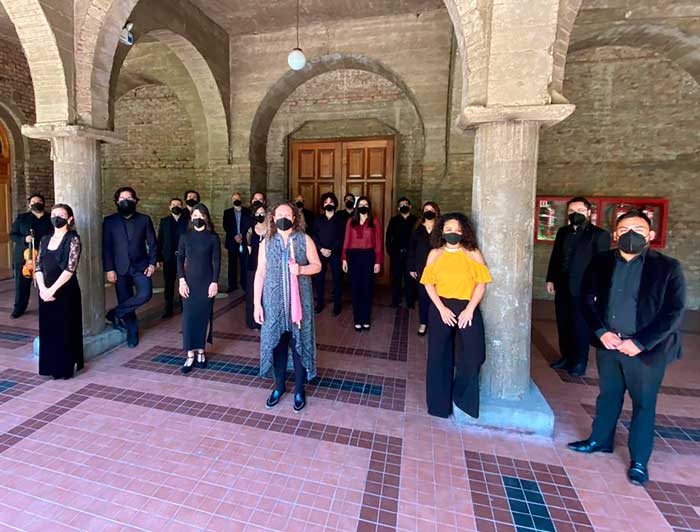 Under the direction of Felipe Ramos Taky, five new concerts by professors from the UC Institute of Music and invited interpreters will be devoted to 16 cantatas by Johann Sebastian Bach, thus continuing the project started two years ago by the well-remembered maestro Víctor Alarcón.

From Sunday, November 29, five new deliveries of the complete cycle of the cantatas by Johann Sebastian Bach will be offered by the UC Institute of Music . Under the direction of Felipe Ramos Taky, the concerts will be held in the Templo Mayor of the Campus Oriente UC, without a public in person, and will be broadcast in streaming at 7:00 p.m. on Sundays, every two weeks, on Música.uc.cl , YouTube and social networks .

This gives continuity to the monumental project started in July 2018 by the remembered choral teacher Víctor Alarcón, who died early, just two months later, in a car accident.

“Bach Santiago is a dream that Víctor Alarcón had for a long time. At the moment in which he dies unexpectedly, there is a commitment from the Catholic University, through its rector Ignacio Sánchez, and of course the UC Institute of Music, to assume this challenge of carrying out the project and that Santiago is the first city in Latin America where the integral of Bach’s cantatas is performed ” , comments Karina Fischer, director of the UC Institute of Music.

Retaking this cycle was a priority for when sanitary conditions allowed the holding of new concerts, complying with all biosafety protocols.

“Finally that moment arrived. It represents great joy and emotion to meet again in the Templo Mayor of the East Campus to rehearse and record these five Bach Santiago programs ” , reveals the flutist.

Also noteworthy is the participation of Guido Minoletti, who has just been awarded the President of the Republic Prize for National Music.

“He has worked on this project from the beginning, we have maintained the teams that Víctor Alarcón trusted to think about Bach Santiago,” says Karina Fischer.

Also Felipe Ramos Taky, professor at IMUC, was at the core of the beginning of Bach Santiago, and assumed the general direction of the project.

“Continuing this cycle is a way to honor the memory and legacy of Víctor Alarcón. Plus, it’s such a huge project, it’s an honor to do it! It took a lot of strength from the first moment, and also many followers, even a different audience was generated, which filled each church where we did the cantatas on Sunday afternoons ”, says Ramos.

The five new concerts will be broadcast from this Sunday, every other week, until January 24. In them, says the director, they will address a total of 16 cantatas by the famous Baroque composer, organized according to two criteria; their organology and the liturgical season for which they were written. The sopranos Claudia Pereira and Pilar Garrido, the contraltos Evelyn Ramírez and María José Uribarri, the tenors Rodrigo del Pozo and Gonzalo Quinchahual, and the baritones Patricio Sabaté and Pablo Castillo, as well as an instrumental ensemble and vocal octet participate as soloists.

In the first program, on November 29, the Cantata BWV 161 Come, sweet hour of death, stands out.

“It speaks of the joy that is felt by the dogma of death as redemption, and has very distinctive numbers for the voice of the contralto, which are also very beautiful,” says Felipe Ramos.

The Cantata BWV 2 Oh God, look from heaven, meanwhile, will be one of the works performed at the second concert, on December 13. The director explains that it is of high difficulty and that it is built on the basis of “a single melody, which was well known at the time, by Lutheran choirs. It is an eminently choral composition in which the instruments are doubling the voices of the choir ”.

On December 27 the Cantata BWV 35 Spirit and Soul are puzzled, due to a distinctive feature: the obbligato organ will be highlighted.

“This means that the organ not only acts as an instrument on the basso continuo, but also has its own part, and that at the time it was probably played by Bach himself on the organ” , explains Felipe Ramos Taky.

In fact, Bach composed more than 300, but only 209 have been preserved to this day. This corpus contains more than 600 arias, recitatives and duets. The character of each cantata depends on the liturgical commemoration to which it is dedicated, and all are dramatically very rich.

In these five concerts, the Cantatas BWV 173 Exalted flesh and blood, BWV 33 Only in You, Lord Jesus Christ, BWV 108 It is fitting that I go, BWV 104 You, Shepherd of Israel, listen, and BWV 28 ¡ Praise God! now the year is coming to an end.