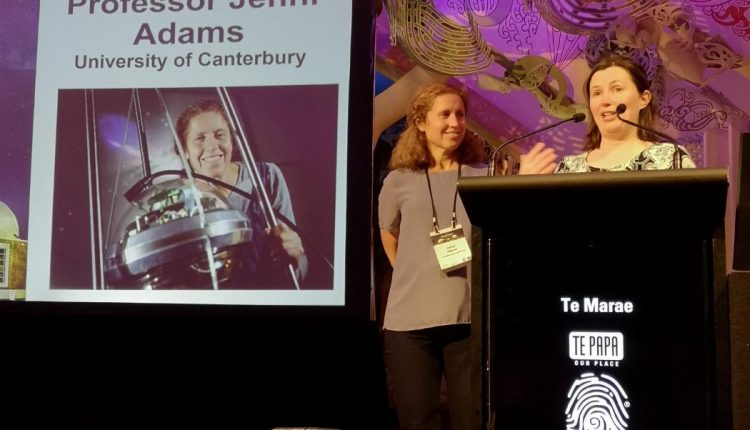 Detecting tiny particles that are “messengers from space” using a giant detector buried under Antarctic ice has helped a University of Canterbury (UC) professor become the first woman to win a prestigious physics award.

UC Physics Professor Jenni Adams was presented with the 2021 Dan Walls Medal, the top award of the New Zealand Institute of Physics (NZIP), at a ceremony in Wellington last night.

The medal is presented to a Kiwi physicist who is judged to have made the greatest impact, both nationally and internationally, in their field of research.

Professor Adams, who has lectured in physics and astronomy at UC since 1998, says it’s an honour to receive the award.

“I’m definitely really proud as a woman to receive this recognition. There have traditionally been fewer females working in the physics field, but I’ve been feeling really encouraged seeing the growing number of women attending the NZIP conference this week.”

She is the lead New Zealand scientist in the international IceCube collaboration, which 10 years ago built a huge 1 km-long telescope under Antarctic ice at the Amundsen-Scott South Pole Station. The observatory, which continuously collects data, has made several world-first discoveries relating to neutrinos – tiny, lightweight particles that offer a unique way to find out more about the universe.

Professor Adams describes neutrinos as “messengers from space”. In 2013 the IceCube team detected the highest energy neutrinos ever documented, a discovery that won the Physics World Breakthrough of the Year.

“It is an exciting project to work on, making discoveries at the high-energy research frontier,” Professor Adams says.

She has two children and is actively involved in sport and hopes she can show younger women that it’s possible to “have a life and be a physicist”.

“I’ve always wanted to promote physics because it’s a great subject to do. We’re trying to understand how things work, like solving a puzzle. It’s a great, useful skill.”

The IceCube project involves the expertise of a team of up to 400 scientists around the world and Professor Adams is delighted that its value has been recognised.

“I am very proud to be working in an international team that has achieved a series of breakthrough results that would not have been possible without our combined commitment. It’s great that this award is affirmation of research excellence that’s been produced in a collaborative setting.”

Professor Adams established the Dan Walls medal in 2008 when she was president of the NZIP. It was awarded that year to physics professor Sir Paul Callaghan, the founding director of the MacDiarmid Institute, who died in 2012.

She has been a member of the Scientific Committee for Antarctic Research steering committee for Astronomy and Astrophysics in Antarctica since 2014.

President of the NZ Institute of Physics Dr Natalie Plank says it’s a pleasure to present Professor Adams with the medal.

“Of course, it rewards the hard work behind her excellent and truly ground-breaking neutrino research with the IceCube collaboration. She is also the first woman to receive the award, and it is poignant that Jenni was the President of the NZIP when this award was instituted in 2008.”