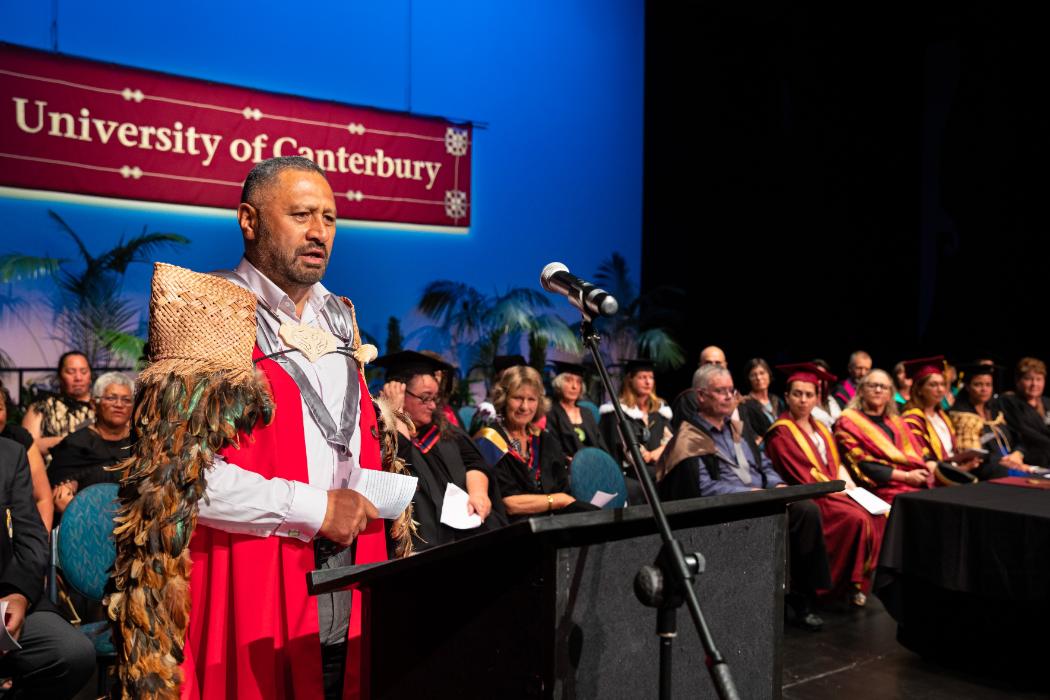 The University of Canterbury’s (UC) first Doctor of Education graduate will receive his qualification in his home town of Rotorua today.

Te Hurinui Karaka-Clarke (Te Arawa/ Ngāi Tahu) joins 42 other graduands for UC’s Rotorua graduation ceremony. The ceremony is held annually for College of Education, Health and Human Development students based in the North Island studying remotely in a range of qualifications from the Bachelor of Teaching, to postgraduate diplomas, Master’s and the Doctor of Education.

For his doctorate, Karaka-Clarke explored the challenge of incorporating Taha wairua (spiritual health), one of the four pillars of the Māori health model Te Whare Tapa Whā, into online learning.

Along with lecturing in te reo Māori in the College of Education, Karaka-Clarke leads the Hōaka Pounamu Bilingual and Immersion Teaching endorsement for Māori-language immersion school teachers. The year-long programme is taught face-to-face but has recently included an online distance option. It starts with a relationship-building, one-week noho marae (face-to-face immersion) with three more of these through the year.

Karaka-Clarke first enrolled in a combined Arts and Law degree at UC.

“It was around the time of the Ngāi Tahu settlement. You might remember there was quite a backlash from what they then called ‘Middle New Zealand’ – they weren’t happy. I used to get quizzed quite a bit and I didn’t know anything about it. The kids were young then, one or two years old, and I thought, ‘I need to find out about this’.

“I’ve always believed that you need to be a good role model for your children. Māori children have been over represented at the wrong end of all the statistics and I didn’t want that for my kids, so I thought, ‘I’ve got to show them that I can do it, so they know they can do it’.”

It was a huge shift for the former soldier of 12 years who had a young family and a job to factor in. His military background helped him with self-discipline and a strict schedule.

Karaka-Clarke dropped law as his passion for te reo Māori blossomed. University was initially daunting, but he was offered good support and he earned his Bachelor of Arts in te reo Māori, then followed it with a Graduate Diploma in Teaching at what was then the Christchurch College of Education. He taught for five years, while, keeping to that strict schedule, finishing his honours year as well.

Te reo Māori was his second language, so he understood the challenges of being a beginner.

“When I was a child in Rotorua, my parents were fluent te reo speakers and my grandfather was the chief of the tribe, but I came through the generation where the philosophy was that it was better to learn English than te reo Māori if you wanted to get ahead in the modern world. So my parents didn’t encourage speaking te reo Māori. I just picked up bits and pieces.”

He works best with others, he says, which he learned when his study group helped him get through his first qualification. It was another reason for choosing the specialised Doctor of Education, which is designed for professionals in education, health sciences, and related field and built on a cohort model of inquiry.

“I chose this qualification because firstly it is a new qualification, secondly it was offered part-time, thirdly I could study a kaupapa or a topic that I was actually working in already, but the most attractive thing for me was the cohort model. I know my particular learning style is collaborating with others, because it means you are accountable to your group.”

He is justifiably pleased to have come so far, not only for himself and his children, but for his wider family and community as well.

“For a lot of our Māori families, school for parents and grandparents was not a good experience – they call it intergenerational trauma.

“The kids don’t see education passed down through the family. Kids have quite a narrow outlook; what they see around them is how they are formed, so if no one in your family has ever been to university then you are not likely to go.

“I broke that mould for my children and hopefully for wider family too – I have two nieces who have studied and another one is studying now and even my brother-in-law too! You just need one person to be that role model.”