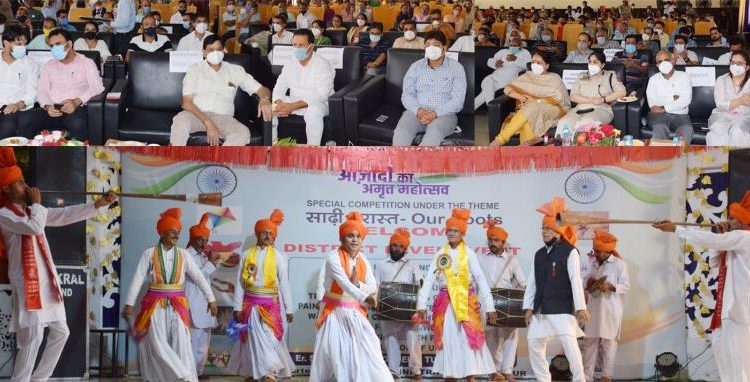 Pertinently, the district administration Udhampur organized several competitions from August 7 to August 11 at District and Sub-Divisional Level to mark the celebration of 75 years of India’s Independence.

While congratulating the organizers, the DDC Chairperson said that such programmes go a long way to preserve the tradition and culture in the time of modernization. He asked the District Administration to organize more such events in the district by involving youth to imbibe in them a sense of belongingness towards the rich culture and diversity of Indian Nation.

While extending Independence Day greetings to the people of the district, he hoped that the National festival would be celebrated with fervour and gaiety.

Lauding the tireless efforts of District Administration, the Div Com said that such types of competitions provide a platform to the young generation to know about their rich culture and tradition. “Such programmes symbolize unity in diversity besides providing a common platform to the local people to share culture and tradition which further help in strengthening the bond of brotherhood and communal harmony in the region” he maintained. He thanked all the participants and wished them a bright future.

Lauding the enthusiasm among the participants, the DC said that the main objective of organizing these competitions was to enable the participants to showcase their talent on a common platform.

The Dignitaries also gave away the certificates of appreciation to the winners of competitions.

Scintillating cultural performances were also presented by the artists, which were highly applauded by the audiences.

Later, the chief guest distributed prizes and certificates among the winners on the occasion.

University of Auckland students and alumni shine at Tokyo Olympics

iednewsdesk Jun 25, 2022
While working on his MBA as part of Rady School of Management’s FlexWeekend program, Lijun Liu noticed that the…

UC San Diego: With Roommates, It’s All About Chemistry, Molecularly…

University of Exeter: Early success of Exeter’s NIHR School for…