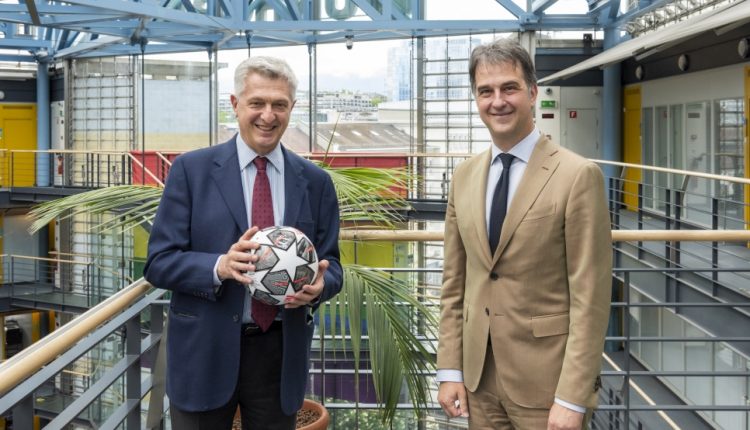 By India Education Diary Bureau Admin On May 23, 2021
Share

UEFA, the Union of European Football Associations, and UNHCR, the UN Refugee Agency, have this week signed a Cooperation Protocol to support refugee access to sport and enhance social inclusion.

The Protocol commits the two organisations to establish long-term initiatives to support refugees and forcibly displaced people by harnessing the transformative power of football to assist and uphold their rights and strengthen their integration in their host communities.

The partnership will also encourage close cooperation on the ground between UEFA’s member associations and UNHCR offices across Europe.

“No matter where in the world I travel for UNHCR, refugee camps, settlements, towns and cities, I see how football has the extraordinary ability to unite people around a common passion. Through our partnership with UEFA, we hope to use the power of football to connect displaced people and the communities that host them,” said UN High Commissioner for Refugees Filippo Grandi.

“Sport provides an opportunity for refugee children and youth to be included – it also has the transformative power to rebuild lives and inspire positive values,” he added.

For UEFA President, Aleksander Čeferin, the Cooperation Protocol “is an impactful way to further strengthen football as a powerful tool to foster sustainable, social inclusion of refugees and enhance social cohesion. The partnership with UNHCR builds on UEFA’s already extensive work in this area, including through initiatives and programmes of the UEFA Foundation for Children. Most importantly, our joint activities will have a real impact on the daily lives of refugees and other forcibly displaced persons.”

UEFA Football and Social Responsibility Director, Michele Uva, added that “the institutional partnership with UNHCR underlines UEFA’s commitment to the newly-added Responsibility pillar of the UEFA Strategy and its specific policies of Refugees Support and Inclusion, which reflect our responsibility to ensure European football’s support to these important topics for civil society.”

The agreement was signed by UN High Commissioner for Refugees, Filippo Grandi, and UEFA’s Football and Social Responsibility Director, Michele Uva, on Wednesday at UNHCR’s headquarters in Geneva.

As deadly surge of COVID-19 sweeps across South Asia, UNICEF calls for US$164 million to help save lives