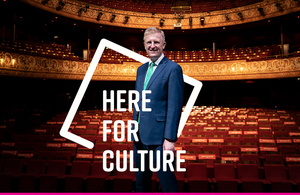 Details of more than 2,700 organisations being offered nearly £400 million in grants and loans to help the culture and heritage sector reopen and recover has been announced

Culture Secretary Oliver Dowden has announced details of over 2,700 organisations being offered nearly £400 million in grants and loans to help the culture and heritage sector reopen and recover.

This brings the Government’s total investment across grants, capital and repayable finance from the Culture Recovery Fund so far to more than £1.2 billion across over 5,000 individual cultural and heritage organisations and sites.

The funding was reserved in the first round of the £1.57 billion Culture Recovery Fund to allow the Government to respond to the changing public health picture. With more than 70% of funding going outside of London, it will help organisations across the country as they welcome back visitors and return to normal operating models in the months ahead.

Over £170 million in repayable finance has been offered to organisations including the National Theatre and Royal Shakespeare Company. A further £81 million in new loans are being announced for 23 nationally and internationally significant organisations receiving support in excess of £1 million, including English Heritage Trust, The Lowry and Sage Gateshead.

The English Heritage Trust, which cares for 420 historic monuments, buildings, objects and places, will receive £23.4 million to cover Covid-related losses and support investment in essential maintenance. The Lowry Centre Trust, the world class Salford-based arts centre, will receive £7.3 million, which will help the organisation to continue its community outreach programming and ensure that the LS Lowry collection is appropriately cared for. The North Music Trust, which operates the flagship music performance and artistic development Sage Gateshead, will receive £3 million to support operational costs ahead of reopening and help the organisation to continue its valuable work including integrating its digital and in-person offerings.

The first round of grants and repayable finance totalling more than £800 million were allocated to ensure the immediate survival of 3,800 cultural organisations and heritage sites across the country. This second tranche of funding builds on the lifeline grants already awarded to support museums, theatres, performance venues, historic sites and cinemas as they reopen to audiences and visitors throughout the spring and summer.

Glastonbury Festival will receive £900,000 to help the festival continue in 2021, with two smaller events this year, as well as to carry the festival through to 2022.

A further £6.5 million has been awarded by the British Film Institute to independent cinemas including £138,333 for the East Finchley’s Phoenix Cinema, Britain’s oldest cinema in continuous use where Dame Judi Dench is a patron, and £45,640 awarded for the Barn Cinema in Dartington, based in a 14th century barn. This brings the number of cinemas supported by the Culture Recovery Fund for Independent Cinemas to 209.

Grants worth almost £60 million have been awarded to help theatres plan for reopening in every corner of the country from the West End’s Criterion Theatre to the Wolverhampton Grand Theatre. The Criterion is receiving £164,501, taking its total support from the Culture Recovery Fund to £493,504.

Nimax Theatres, which operates six sites in the West End including the Palace Theatre, the Lyric and the Apollo Theatre, will receive £898,784 from the second round of the Culture Recovery Fund. This funding will support the theatres’ preparations to re-open to audiences, such as deep cleaning, Covid-testing equipment and training for staff.

Earlier this week, the Culture Secretary visited the Wolverhampton Grand which has been awarded £568,357 to restart socially distanced events when it is safe to do so.

Our record breaking Culture Recovery Fund has already helped thousands of culture and heritage organisations across the country survive the biggest crisis they’ve ever faced.

Now we’re staying by their side as they prepare to welcome the public back through their doors – helping our cultural gems plan for reopening and thrive in the better times ahead.

Dame Judi Dench, Oscar® award-winning actor (Shakespeare in Love, Philomena, Mrs Brown, Skyfall), a patron of the Phoenix East Finchley and the Theatre by the Lake which hosts the Keswick Film Festival and a BFI Fellow said:

Local cinemas are a vital part of our cultural lives, enthralling us with films about lives that we recognise as well as offering us stories about other cultures from around the world. They are places where people come together for a shared experience and have inspired many to make their careers on screen. We need to make sure that generations today and in the future have the same opportunities to enjoy and take part in the communal big screen experience.

The Criterion Theatre Trust is just delighted to have received CRF second round grant funding in support of our plans to re-open in May 2021. Offering live theatre to a socially distanced audience presents a financial challenge, but the support extended through the Culture Recovery Fund is a boost that allows us to re-open in a Covid-safe way. The Trust will be able to continue its work and, when that glorious and happy time comes, to welcome audiences back to our beautiful theatre, to enjoy once again the irreplaceable and unforgettable experience of live theatre.

As Patron of The Pied Piper Theatre Company, I’m delighted to hear that the company are being supported by the Arts Council’s Culture Recovery Fund. It’s tremendous that the value of their plays for audiences of young children are recognised.

Underlying the UK’s international Film & TV success is the best of British Theatre. So I am particularly delighted that Chichester Festival Theatre, my local theatre, is being supported so generously by the Culture Recovery Fund. The grant will enable it to reopen its doors with confidence, renew the relationship with its audience and take its place once again at the heart of its vibrant community.

I’m absolutely delighted Komedia has got this funding. It means that it can continue to be the hub for both established comedy as well as nurturing new talent. This is great news for the area.

The Customs House has a special place in my heart so I’m really delighted this grant will help secure its future. It’s so important for South Tyneside and it’s wonderful to see our arts centres being able to work towards opening again.

We’re extremely grateful to be offered a significant award from the Culture Recovery Fund. After losing millions from the cancellation of our last two Festivals, this grant will make a huge difference in helping to secure our future.

Fantastic news. BYMT has been awarded a grant in the second round of Arts Council England’s Culture Recovery Fund.

This grant will help to underpin our Summer Season; enable the commissioning and creation of new work – 10 productions taking place around England this summer, including Halifax, Ipswich, Plymouth and London.

Thank you to Arts Council England and the DCMS (Department for Digital, Culture, Media and Sport).

Museums across the country have also benefited from more than £25 million in this latest round of funding. The London Transport Museum which received £1,750,000 in the first round of the Culture Recovery Fund will get another £875,000 to help the museum reopen to the public in a Covid secure manner. Thanks to government support, the museum will also be opening new exhibitions and community projects including hosting virtual sessions for schools and new virtual reality ways to enjoy exhibitions.

The National Football Museum in Manchester will receive £239,721, building on the £515,965 it received from the first round. The museum holds the largest public collection of football objects in the world and works with sports museums worldwide and provides guidance on collections and exhibitions. The additional funding will be used to support the museum to reopen to the public through the summer.

Comedy clubs, music venues and multi-purpose stages continue to be supported in the latest round of funding awarded by Arts Council England. Award-winning Brighton venue Komedia, which usually programmed over 700 events a year to provide a platform for performers launching their careers, will receive £123,500 to resume socially distanced music, comedy and theatre performances. £213,853 will support the leading independent grassroots venue the Brudenell Social Club in Leeds to restart live events. Iconic venues like the Camden Roundhouse are also being supported with awards of £1,500,000 to welcome back audiences to live events.

Awards have been made to benefit the widest possible range of art forms and organisations including circuses, like Cirque Bijou and Gorilla Circus, and touring groups which bring high-quality productions to people everywhere. Wise Children, the South West Theatre Company created and led by award-winning director Emma Rice, will receive £173,598 to return to rehearsals and restart their unique professional training programmes after pivoting to streaming performances online and podcasting during the pandemic.

These awards are also supporting vital supply chain organisations for live performances, like Lamp and Pencil who have received £120,307. The Hertfordshire-based production company installs, builds and maintains technical infrastructure for productions. This includes the LED displays for the West End hit musical Six and wands used in Harry Potter.

The National Lottery Heritage Fund and Historic England have allocated £44 million to over 470 heritage organisations. This builds on more than £146 million awarded to the sector in the first round of awards, which included funding for revenue and capital works. Historic sites like Bamburgh Castle and Ely Cathedral, that typically attract tourists to the local areas, are also supported by this latest funding, receiving £137,400 and £210,700 respectively to help teams at these centuries-old buildings prepare for the return of modern visitors. Charlestown Harbour, a UNESCO World Heritage site and filming location for popular TV dramas and films such as Poldark and Ammonite, has been awarded £109,500 to help the site survive.

Nearly all of the original £1.57 billion Culture Recovery Fund has now been allocated, with over £1.2 billion in grants and repayable finance offered to more than 5,000 individual organisations and sites, and further grants to be finalised over the coming weeks. £188 million has been given to the devolved administrations through the Barnett formula, with Northern Ireland receiving £33 million, Scotland £97 million and Wales £59 million. £100 million has been given to national cultural institutions in England and the English Heritage Trust.

At last month’s Budget, the Chancellor announced a £300 million boost for the Culture Recovery Fund, as part of a wider £408 million package for arts and culture taking direct government investment in the sector since the start of the pandemic stands at almost £2 billion. Further details on the third round of the Culture Recovery Fund will be available in due course.