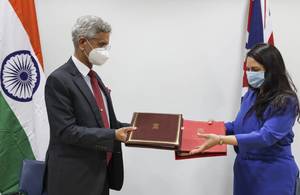 Landmark agreement will allow young British and Indian nationals to work and live in each other’s countries and accelerate the removal of illegal migrants.

London: The governments of the UK and India have signed a new landmark migration agreement, which will see both countries benefit from enhanced arrangements on migration issues.

Home Secretary Priti Patel and India’s Foreign Minister Subrahmanyam Jaishankar today (Tuesday 4 May) signed the Migration and Mobility Partnership agreement, aimed at supporting people to live and work in both countries while addressing long standing problems of illegal migration from India to the UK.

The historic agreement delivers on the UK government’s fair but firm New Plan for Immigration – attracting the best and brightest and supporting people coming to the UK through legal routes, while stopping the abuse of the system and speeding up the removal of those who have no right to be in the UK.

The agreement will enhance and accelerate the processes to return Indian nationals with no legal right to stay in the UK and vice versa, and ensure greater co-operation around organised immigration crime.

In a first of its kind between the two countries, both governments have agreed enhanced mobility provisions for young professional Indian and British citizens which will allow people to live and work in the two countries for up to two years.

I am committed to delivering for the British public a fair but firm New Plan for Immigration that will attract the best and brightest talent to UK through our new points-based immigration system, whilst clamping down on those who are abusing the system. This ground-breaking new agreement with India is an important milestone in delivering on this pledge.

This landmark agreement with our close partners in the government of India will provide new opportunities to thousands of young people in the UK and India seeking to live, work and experience each other’s cultures. This agreement will also ensure that the British government can remove those with no right to be in UK more easily and crackdown on those abusing our system.

The deal builds on Prime Minister Boris Johnson’s previous pledge to deliver a quantum leap in the UK’s bilateral relationship with India.

On illegal migration, the Partnership will ensure swifter and more efficient returns by accelerating timescales for removals, by committing appropriate resources to facilitate returns, and steps to make it easier for Indian nationals to be identified and returned.

Both governments are determined to tackle a wide range of immigration and homeland security issues and this agreement commits both countries to regular dialogue between the two governments in this area for the first time.

The new bespoke route for young professionals will allow 18-30-year-olds to work and live in the other country for up to 24 months. This professional and cultural exchange programme will work similarly to current Youth Mobility Schemes, with India being the first visa national country to benefit from this.

Professional Indian nationals feature strongly in the UK’s new points-based immigration system, which encourages the best and brightest to come to the UK based on their skills and talent rather than where they are from.

According to the most recent statistics, more than 53,000 students from India came to the UK to study last year, up 42% on the previous year. Nearly a quarter of all international students in the UK are from India.