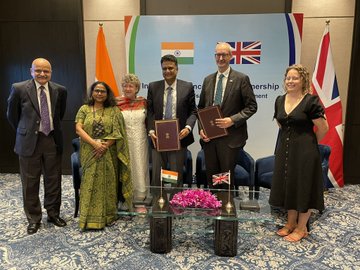 New Delhi: The UK and India on Thursday (21 July) signed an agreement to officially recognise each other’s academic qualifications. The Memorandum of Understanding (MoU) on mutual recognition of academic qualifications will expand cooperation and exchange between the two countries’ higher education systems, and boost opportunities for students in India and the UK.

This development will also open doors for institutions to create courses that can be delivered in both countries. It complements the ambitious vision set out in India’s National Education Policy to internationalise education and to create globally employable graduates.

International Trade Secretary Anne-Marie Trevelyan said: “The UK and India are already important destinations for each other’s students and this agreement will boost that even further.

“We are delighted to deliver on our promise to unblock barriers to trade between our two nations and make UK higher education even easier to access and more appealing to Indian students.”

Barbara Wickham, Director India, British Council, said: “The agreement of the mutual recognition of academic qualifications is a significant moment of celebration in the India-UK education relationship. The agreement simplifies continuation of academic study and recognition of credentials for employment, benefitting thousands of young people and talented students in both our countries. This will support even greater collaboration between our higher education sectors, nurture globally ready graduates through an increasingly internationalised education; and further enable joint education, research and innovation initiatives to explore solutions for shared global challenges. We are also delighted that this announcement comes during the ongoing India/UK Together, a Season of Culture – our landmark programme that marks India’s 75th year of Independence.”

Secretary of State for Education James Cleverly said: “India is one of the fastest-growing and most dynamic nations on earth, and a priority partner for our International Education Strategy, so it is hugely welcome that this agreement paves the way for deeper partnership between our thriving economies.

“UK universities offer an education that is rightly prized across the globe and this agreement will create more opportunities for Indian students to access our high-quality degree programmes, either by coming to study here in the UK or through new courses which our universities will be able to deliver abroad.”

Jan Thompson, Acting British High Commissioner to India, said: “This agreement is brilliant news for the thousands of Indian students who come to the UK each year. Nearly 108,000 study visas were issued to Indian nationals in the year ending March 2022 alone. Indian students make up one of the UK’s largest groups of international students and the mutual recognition of qualifications will benefit all past, present and future Indian graduates from the UK. I’m delighted that we have successfully delivered yet another agreement under the UK-India Enhanced Trade Partnership. I look forward to the many other exciting new developments that the UK and India embark upon in this transformative decade for the bilateral relationship.”