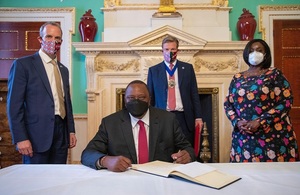 At the start of a three-day visit to the UK to co-host the Global Education Summit with Prime Minister Boris Johnson, Kenyan President Uhuru Kenyatta and Foreign Secretary Dominic Raab announce strengthened links between the City of London and Nairobi and welcome new investment package.

At the start of a three-day visit to the UK to co-host the Global Education Summit with Prime Minister Boris Johnson, President Kenyatta witnessed the signing of a new memorandum of understanding between TheCityUK and the Nairobi International Financial Centre Authority, establishing a formal partnership, including closer collaboration with the London Stock Exchange.

This will help to channel international investment into Kenya and the wider region, making sure firms and investors are able to make the most of trade and investment opportunities.

This £132 million package of new UK-Kenya deals from the UK government and British firms will support investment in the region, including building new green affordable homes, connecting households to clean energy, and boosting manufacturing.

This package of investments will create new jobs and unlock new opportunities for UK and Kenyan businesses by strengthening the relationship between Nairobi and the City of London.

British insurer Prudential intends to be the first firm to set up in Nairobi’s new International Financial Centre, while Kenyan mining company Mayflower Gold announced plans to dual list its shares on both the London and Nairobi Stock Exchanges in a deal worth £14 million.

University of Copenhagen: Large, economic wheels must be…

University of Copenhagen: Lockdowns did not significantly…

Africa is an important part of our long term growth strategy and I am delighted that the UK and Kenya are collaborating on financial services, where there are many opportunities for innovation. Prudential is proud to be working with both countries on this initiative.

We believe that deepening the financial sector across the continent is key to building and driving economic resilience, development and growth in a region of great promise and opportunity. Joining the International Financial Centre in Nairobi is testament to our long-term commitment to supporting financial sector development across Africa.

President Kenyatta also secured the backing of UK investors to boost affordable housing and manufacturing across Kenya. £28 million of private investment in Kenyan manufacturing was confirmed today as a result of the UK’s Manufacturing Africa initiative, and UK company ARC Ride announced plans to invest £4.5 million in growing its fleet of electric vehicles in Kenya.

A new digital customs system for Kenya will make it faster and easier for goods to move between Kenya and the UK, and between Kenya and the rest of the world. Delivered by TradeMark East Africa, and backed by £18 million of UK funding, this will boost Kenya’s economy, allowing firms to take greater advantage of the recently ratified UK-Kenya Economic Partnership Agreement and grow our £1.4 billion mutual trade.

Tomorrow, President Kenyatta will meet with the Prime Minister ahead of attending the Global Education Summit on Thursday.