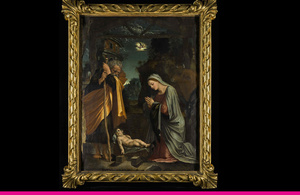 A temporary export bar has been placed on painting The Nativity by Baldassare Tommaso Peruzzi worth over £460,000

An extraordinarily rare painting depicting the nativity is at risk of leaving the country unless a UK buyer can be found to save the work for the nation and enable additional study.

To protect the painting from this risk, an export bar has been placed by the Government, enabling researchers to better understand the work within a British context given its significant history.

Worth over £460,000, The Nativity by Baldassare Tommaso Peruzzi is one of a few surviving paintings by the artist and is particularly notable for its daring use of dark tonalities and its dramatic side lighting, pre-empting works by highly influential artists such as Raphael and Parmigianino.

The Minister’s decision follows the advice of the Reviewing Committee on the Export of Works of Art and Objects of Cultural Interest (RCEWA). The RCEWA agreed that this was an extraordinarily rare painting, noting that few works by Peruzzi survived and almost none were outside Italy.

A highly-esteemed and versatile artist, Peruzzi’s talents ranged from theatre design to architecture, with this piece exemplifying many of the innovations taking place in Roman painting in the early 16th century.

“Kwando” Named as Official Selection for the 6th Annual…

This is a beautiful and fascinating work, providing us with an invaluable insight into Roman paintings of the early 16th century. Given the rarity of a painting by Peruzzi and the amount we have to learn from this piece, I hope a UK buyer can be found so this work can be studied and enjoyed for years to come.

Peruzzi’s rare evocation of the Nativity by night was painted in Rome in the second decade of the sixteenth century, when great artists like Raphael were experimenting with dramatic compositions and light effects. Long attributed to Raphael’s pupil, Giovanni Francesco Penni, it was identified as a Peruzzi in the 1940s by the British Museum’s considerable scholar of Italian drawings, Philip Pouncey, who owned the painting and reattributed no less than 110 drawings to Peruzzi, who was one of his favourite draughtsmen. Painted on panel, the picture is in remarkably good condition. The price seems very reasonable for a painting of this date and exceptional quality and RCEWA hopes that it will remain in Britain, where it offers scope for further research into the innovations of Roman painting around 1515 and into twentieth-century British connoisseurship of Italian art by Philip Pouncey and his distinguished contemporaries.

The decision on the export licence application for the piece will be deferred until 22 October 2021. This may be extended until 22 April 2022 if a serious intention to raise funds to purchase it is made at the recommended price of £463,317.

Offers from public bodies for less than the recommended price through the private treaty sale arrangements, where appropriate, may also be considered by the Minister. Such purchases frequently offer substantial financial benefit to a public institution wishing to acquire the item.