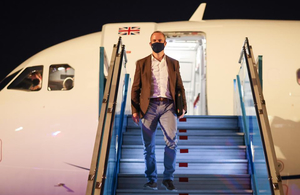 The Foreign Secretary, Dominic Raab, arrived in Hanoi today (Monday 21 June) ahead of a three-day visit with high-level meetings in Vietnam, Cambodia and Singapore focussing on trade, defence and security.

Tomorrow the UK will formally launch accession negotiations with CPTPP nations (Tuesday 22 June), helping Britain further engage with some of the world’s biggest economies. CPTPP members currently have a combined GDP of £9 trillion, a value which is expected to grow rapidly in the next few years.

This is Dominic Raab’s fifth visit to South East Asia since becoming Foreign Secretary, demonstrating the growing importance of the Indo-Pacific, as set out in the UK’s Integrated Review.

The visit also comes at a time of growing defence and security cooperation with the region, as the UK’s Carrier Strike Group led by the HMS Queen Elizabeth, makes its maiden visit to the region.

Speaking ahead of the visit, Foreign Secretary, Dominic Raab, said:

The UK is committed to strengthening our friendship across the Indo-Pacific.

We are demonstrating this through our commitment to join CPTPP, partner with ASEAN and invest more energy, time and effort in our bilateral relations in the region.

While in Vietnam, the Foreign Secretary will deliver opening remarks at the 5th Asia-Europe Meeting (ASEM) on the UK’s ambitions for its Indo-Pacific tilt to an audience of representatives from more than 50 countries. He will meet Vietnamese leaders, including President Nguyen Xuan Phuc, Deputy Prime Minister Pham Binh Minh and Foreign Minister Bui Thanh Son to discuss the implementation of the UK-Vietnam Strategic Partnership Agreement, in addition to subjects such as global health security, climate change and combatting serious organised crime.

Dominic Raab will then travel to Cambodia to meet Foreign Minister Prak Sokhonn to set out our ambition for the UK bid for ‘ASEAN Dialogue Partnership’ status ahead of Cambodia taking up the chair of ASEAN. This status would give the UK the closest form of relationship with ASEAN. This will be the first Foreign Secretary visit to Cambodia since the British Embassy was reopened 30 years ago.

The visit will finish in Singapore, with a meeting with Prime Minister Lee Hsien Loong to discuss geo-political security and climate change, as well as the international response to Covid. The Foreign Secretary will also meet Foreign Minister Vivian Balakrishnan and address British and Singaporean business leaders from across Asia Pacific, highlighting the economic and strategic benefits of CPTPP and the UK’s wider trade and foreign policy priorities for the region.

Queen Mary University of London: Bank of England must spell out risks of quantitative…